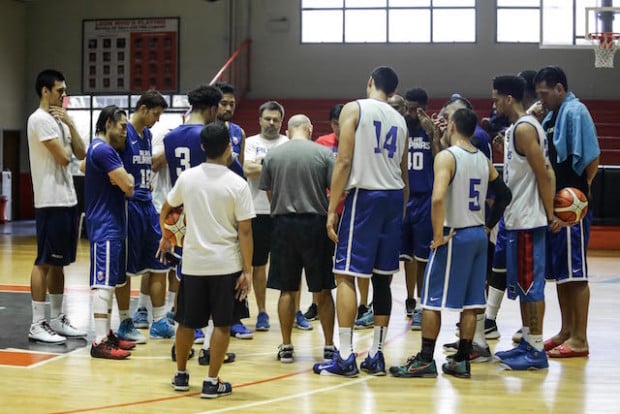 Any moment now, the final lineup tasked to bring the Philippines back to the Olympic stage since the 1972 Munich Games, will be known.

But for the veterans on the team like Star;s Marc Pingris and Ginebra’s LA Tenorio, who could be in their final tour of duty for flag and country, they’re more than willing to do anything just to help Gilas Pilipinas even if that means getting cut.

While many would think the players would kill for a spot, the players themselves feel the only competition between them is just all about challenging one another to be better.

“I don’t see it as a competition. Lagi kong sinasabi sa mga interviews, I’m not here to get any spot sa guards position. I know the capabilities of all the guards here and kahit sino i-lineup dito, okay. Nakita naman natin lahat ng players dito na sobrang deserving lahat sila,” said Tenorio, who was the MVP of the 2012 Jones Cup after leading the country to a gold medal.

Same goes for Talk N’ Text’s Ryan Reyes, a nine-year PBA veteran who could be headed for his first national team stint.

“It’s all healthy competition,” Reyes told INQUIRER.net on Tuesday after giving Gilas some quality minutes during a scrimmage against Iran at Gatorade Hoops Center in Mandaluyong City. “We are all out there in practice competing because if we’re not going hard against each other, then we’re not helping each other out.”

Fourteen will make the roster, but only 12 will get a chance to play with the two slots on the reserved list. Only naturalized center Andray Blatche is shoo in and being a team that’s always at a disadvantage when it comes to size, 6-foot-10 June Mar Fajardo, the country’s most dominant player today, may be assured of a place as well leaving only 10 spots available for 12 players.

National team head coach Tab Baldwin said the decision as to who will make the cut will be announced before training camp shifts to Europe. Gilas leaves for Greece on Friday and won’t be back until late in June.

Pingris said every player in the pool is ready for whatever news the announcement makes.

Tenorio admits getting a spot with all the talent around is a tall order. But the Ginebra playmaker said making the team is not his top priority.

“To be honest, talagang mahirap to get that spot but for me, I’m here to help the young ones based on my experience not only in Asia but also in the world so yung experience ang matutulong ko sa mga bata kung sino man ang maglalaro sa Olympic qualifier.”

Tenorio, though, is sure of one thing.

“Whoever’s gonna be in the lineup, it’s gonna be a competitive and talented one that we’ll get to see in July.”