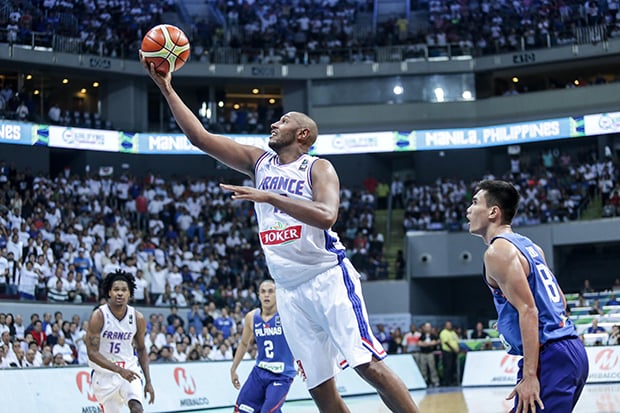 The Philippines showed its mettle as one of the best in Asia but France reminded the Filipinos why it’s a world powerhouse.

Gilas Pilipinas fought until the last second only to fall short, 93-93-84, against France at the start of the Fiba Olympic qualifying tournament Tuesday night before a capacity crowd at Mall of Asia Arena.

“Everybody saw the game. It was a highly-competitive game. We felt we needed to get off to a good start. There’s always the issue of how big of an underdog are when you play a team with the stature of France,” Gilas head coach Tab Baldwin said. “Are you competitive with them or is it going to be a blowout. We saw Iran, Japan, Tunisia all get blown out in their first round games in this big underdog status so I thought, we got off to a great start and we sustained it.”

Nando de Colo and Tony Parker combined for 48 points to lead the French.

De Colo, the Euroleague star and former NBA veteran, gave the Philippines’ fits with 27 points on 9-of-14 shooting from the field that went with six rebounds and three steals while Parker flashed vintage form with 21 points and six assists.

Buoyed by the defeaning crowd, Gilas took an early 10-point lead and at that point, made nearly every single one inside the venue believe an upset was possible.

“But France is one of those teams that don’t panic and they shouldn’t with the players that they have. They continued to pound away at us going to their strengths. I thought Tony Parker took over midway into that second quarter and he and Diaw really controlled the game. They used the excellent players around them.”

But Parker’s drive gave France its first lead and the French never wavered. A breakaway dunk by Kim Tillie made it, 69-56, with 3:25 left.

The Filipinos cut it to four late in the fourth quarter but that was the closest they got with the French seemed impervious to pressure in the endgame.

Gilas plays New Zealand on Wednesday night in a potential do-or-die with the winner clinching a spot in the semifinals.