Blackwater slips past Star in thriller 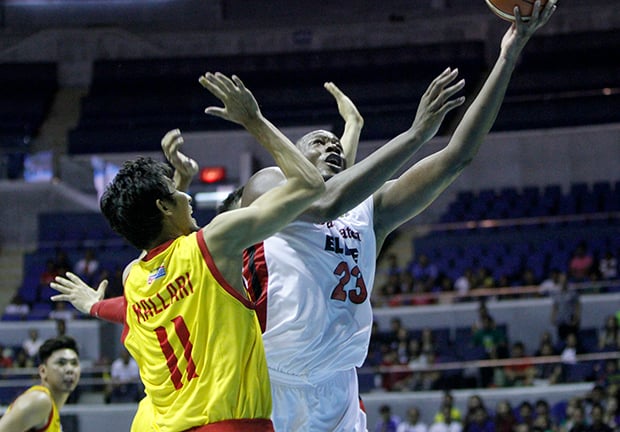 The Elite survived the Hotshots in a fierce endgame battle, carving out a 100-98 win that somehow proved they’re ready to move on after the passing of Gilbert Bulawan.

“It’s good to have this victory after all that have happened to the team especially the passing of Gilbert. It took its toll on us,” said Blackwater coach Leo Isaac.

“Masyadong malapit si Gilbert sa lahat ng teammates nya. In our first game against NLEX, nagluluksa pa lahat, and we have to convince them we have to move on as Gilbert is now resting in peace,” Isaac added.

Eric Dawson scored on a post move with 9.6 seconds to go then Paul Erram blocked a shot by Allein Maliksi in the ensuing play as the Elite chalked up a first win after their losing debut in the conference against the Road Warriors.

A big break for the Elite was Star import Marqus Blakely fouling out with 10 minutes left to play.

“Imports dominate the game in this conference at medyo swinerte kami nawala si Blakely. Dawson also got into foul trouble situation but we got a good effort from our locals like Paul Erram, Jerick Canada, Carlo Lastimosa, Bambam Gamalinda, Kyle Pascual and Mike Cortez,” said Isaac.

With Dawson resting on the bench, the Blackwater locals did put up a tough fight, with Erram, Canada, Lastimosa, Gamalinda and Pascual all finishing with double-digit outputs.

But Dawson won it in the end for the team with his crucial post attack versus Marc Pingris then a charity in the dying seconds.

Dawson wound up with 14 markers, 11 boards, three assists, three blocks and one steal against four turnovers in 35:01 minutes of action.

Erram top scored with 16 points that went with six rebounds, three assists and two blocks while Canada contributed 14 markers including a remarkable 4-of-4 three-pointers.

Back-to-back fouls – an illegal pick then a shoving infraction — sent Blakely to the showers.

Dawson got into foul trouble earlier, drawing four in the first half and his fifth in the third quarter.