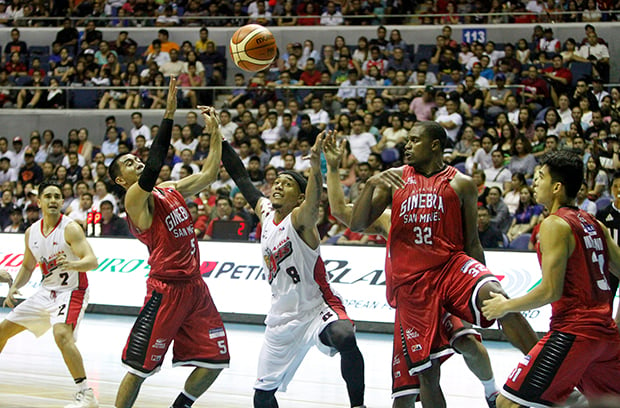 Forced to find a replacement import after Paul Harris’ hand injury, Ginebra coach Tim Cone has been bracing for the worst when he got Justin Brownlee last week.

And his fears materialized in the Gin Kings’ game against Alaska on Sunday.

The 28-year-old forward suffered from cramps as early as the third quarter, something that Cone has been anticipating in the buildup to this game, bared LA Tenorio.

Logging in 29 minutes, Brownlee finished with respectable numbers of 31 points and 13 rebounds.

What worked to his disadvantage, though, was his cramps which left him off the court in the crucial stages of the game which Ginebra lost, 109-100 in overtime.

Arriving to the country last Thursday, Tenorio shared that it has been a mad dash for Brownlee to adapt to his new team.

Despite the circumstances that put both parties in this position, Tenorio acknowledged the great attitude displayed by Brownlee, as the team sees a lot of potential with this new recruit.

Looking back to the close game against Alaska, Tenorio rued the poor free throw shooting the Gin Kings had in the game, going 15-of-29 from the charity stripe. None were bigger than the pair of shots Joe Devance muffed with 1:08 left in the clock which would have pushed Ginebra’s lead up to four.

Instead, two misses led to a head-scratching foul from Devance on RJ Jazul on the other end, tying the game at 94 and eventually, the overtime defeat.

“Sayang,” Tenorio quipped. “I think the story of the game is yung missed free throws namin. Kahit kalahati lang sana na-shoot namin doon, naging iba yung tema ng laro eh. But ganun talaga, we just have to get back to the basics ulit.”