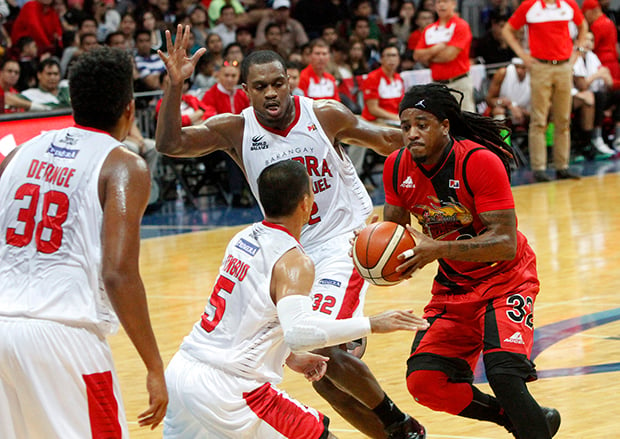 Via the hard, hard way, San Miguel Beer got past Barangay Ginebra to move up to joint second place in the 2016 PBA Governors Cup at Mall of Asia Arena in Pasay City Sunday night.

As in Globalport’s stretched-out double-overtime win over Meralco earlier in the day, the Beermen needed 10 extra minutes to fend off the Gin Kings, 111-105, and catch up with the Mahindra Enforcer at 4-1.

San Miguel squandered a huge 24-point lead in regulations and had to regroup in the extension play, going to Marcio Lassiter and AZ Reid for the clutch baskets as they disappointed the Gin Kings in the end.

Waging a stirring chase from 24 points down at 47-71 and making another fightback from a nine-point deficit in the first overtime, the Gin Kings were a spent force in second OT, suffering a second loss in six games.

“We have to give credit to both teams. Talagang walang kapa-kapatid,” Austria added.

The Beermen outlasted the Gin Kings in the tough grind, drawing much energy from their long break.

Ginebra import Justin Brownlee sat out most of the second overtime due to cramps while Joe Devance appeared to have suffered a calf injury at the finish.

Meanwhile, Reid looked to have something more to give after his 46:26 minutes of action where he delivered 26 points, 16 rebounds and five assists.

June Mar Fajardo also had a double-double game with 17 markers and the same number of rebounds while Lassiter, Alex Cabagnot and Ronald Tubid chipped in at least 14 points each.

Arwind Santos contributed nine markers, five rebounds, one assist, one steal and one block in his first outing in the season-ending tourney.

The Beermen came out smoking, racing to an early 21-point lead, 36-17, and set the pace all throughout until the Kings made a dramatic chase in the fourth.

Brownlee scored on a step-back jumper off Reid to tie the count at 89-all then Japeth Aguilar blocked a shot by Fajardo to send the game into OT.

After Aguilar’s block, the Kings actually could have called a timeout with six seconds to go.

Tenorio, however, lost precious seconds in dribbling the ball and didn’t get a decent attempt at the basket.

Alas, the Kings ran out of gas in the second OT and saw the end of their three-game streak.