Gins learn another lesson after 2OT loss to SMB 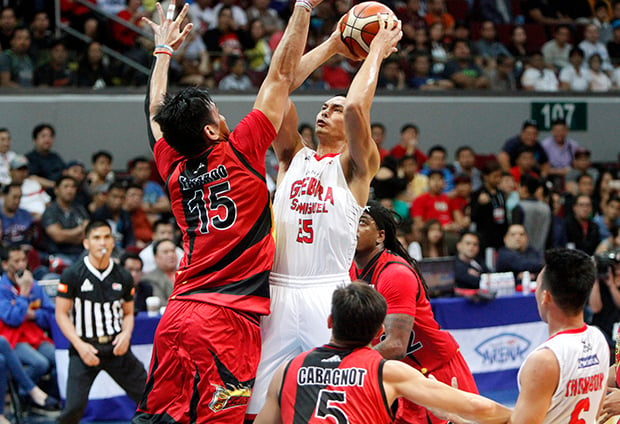 For Japeth Aguilar, Ginebra’s 111-105 double overtime loss to San Miguel on Sunday should serve as a lesson.

“We still have to find a way to win,” he said. “San Miguel is really a good team and they’re the defending champion.”

The Gin Kings fought back from a 24-point lead, 71-47, and almost came away with the victory had they got a better shot at the end of the regulation.

Aguilar also played the role of the hero in the first overtime, as his three from the top of the arc tied the game at 101 to force another extension.

But the Beermen’s poise prevailed in the end as AZ Reid and June Mar Fajardo provided endgame stability.

But Aguilar was also at fault in the downfall, as he committed two huge miscues in the second overtime. His pass to Scottie Thompson went out of bounds and he also forced the issue on a drive as Ginebra stared at a four-point lead with under a minute to play.

The athletic forward couldn’t help but note that the mistakes, not just from him but also from the rest of the team, have been pivotal for the Gin Kings as they failed to close tight games this conference, just like their 109-100 loss to Alaska last July 24.

“Sabi nga ni coach Tim (Cone), we got to find ways in these kind of games because we battle hard,” he said.