Enforcer back on track with win over Elite 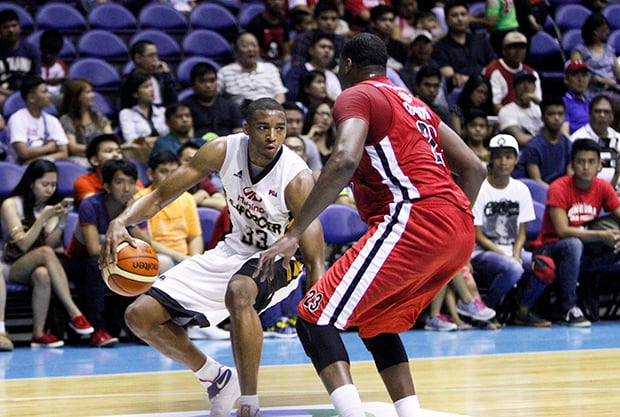 Mahindra snapped its two-game losing skid after a 97-88 rout of Blackwater in the 2016 PBA Governors’ Cup Sunday at Smart Araneta Coliseum.

James White had 23 points and 19 rebounds for the Enforcer, who improved to 5-2 following losses to the Phoenix Fuel Masters and NLEX Road Warriors.

Enforcers assistant coach Chris Gavina said his team was “extra motivated” to play with playing-coach Manny Pacquiao joining them on the floor for better than six minutes.

“The players were inspired today especially with coach Manny,” said Gavina. “The players are extra motivated.”

Mahindra point guard LA Revilla returned after missing three games due to a broken nose. He went scoreless in 23 minutes off the bench, but still made significant contributions with 10 assists.

“We got LA back from injury and he boosted our offense,” said Gavina. “He is the extension of the coaching staff.”

Mahindra’s win was never in doubt even in the final quarter when the Enforcers sealed the game with a mini 6-0 spurt for a 93-77 lead with only 3:20 left.

Aldrech Ramos and Paolo Taha added 15 and 13 points, respectively for the Enforcer.

Carlo Lastimosa led the Elite (1-6), who suffered their fifth consecutive setback, with 17 points while import Eric Dawson posted 15 points and 10 rebounds in his return after missing a game due to back spasms.