Cone on Dalupan: He’s the guy I like to emulate 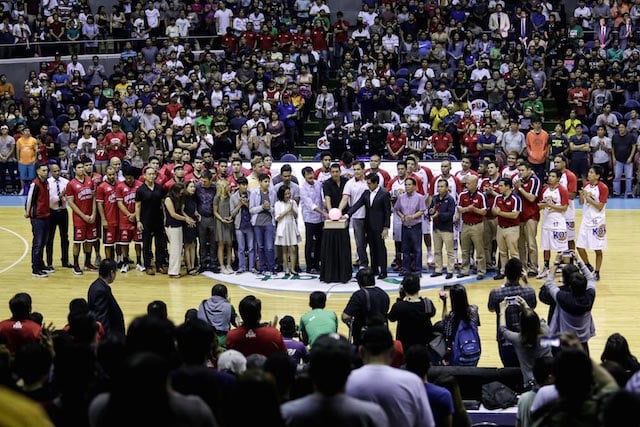 The PBA rang the final buzzer before Barangay Ginebra and Rain or Shine’s game on Sunday as a tribute to legendary coach Baby Dalupan. Tristan Tamayo/INQUIRER.net

Tim Cone and Baby Dalupan have always been in the discussion as the greatest ever to coach in the PBA.

Dalupan is the archetype of a successful coach winning 15 PBA titles while Cone is deemed as the successor to the throne after winning 18.

Cone, however, said Dalupan will always be the one that will be emulated.

“Except for my father, Baby’s the only person I want to emulate in terms of accomplishments, in terms of the kind of person he was,” said Cone after his Barangay Ginebra whipped Rain or Shine, 101-87, on Sunday at Smart Araneta Coliseum.

Dalupan is the first t win a PBA Grand Slam and he did it with Crispa in 1976.

“Obviously, you always want to emulate your father, and he’s No. 1. Baby Dalupan is a real second,” said Cone. “I mean, the more you know, the more I realized what a great person he was.”

Cone said it’s through the family that a person will be genuinely known, and Dalupan is a prime example.

“He’s 92-years-old and he had a great life. He had great children, a great wife. What more can you ask for. So that’s the guy I like to emulate. I’m really happy that we’re to honor him tonight.”

PBA commissioner Chito Narvasa along with some of Dalupan’s former players Alvin Patrimonio, Atoy Co and Allan Caidic and family members led a ceremony where the league sounded the final buzzer as tribute for the legendary coach.