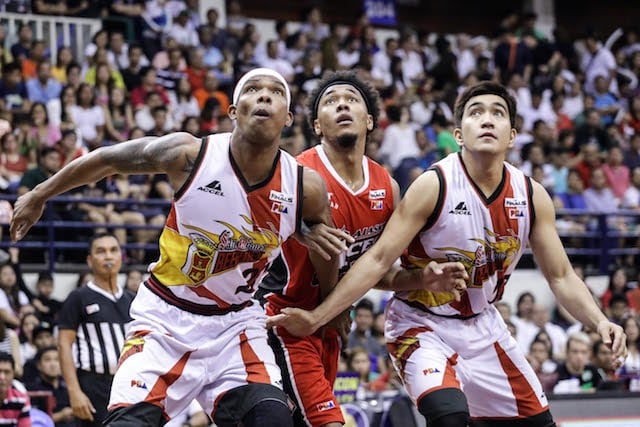 ALA may seem ready to move up after winning against STA this past weekend, but they’ll need to hurdle the mighty San Miguel Beermen if they want to put back-to-back wins together for the first time this conference. SMB, meanwhile, is going to begin a tough stretch of games starting with this one against ALA, and losing here may spark an unfortunate slump for the Beermen.

ALA kept STA at bay in their duel in Davao a few days ago thanks to great defense. They limited STA to just 2/15 3pt shooting in that game while also forcing 20 Hotshots turnovers. If the Aces can show the same defensive intensity here against the Beermen, ALA may just be able to get their fifth win over SMB this season.

SMB and ALA have been pretty much even in their head-to-head match up this season with the Beermen winning 5 of 9 so far. For them to nail their 6th win over ALA in this game, the Beermen will need to play better than they did against GLO last Friday, where they lost, 98-92. SMB did well in the paint against GLO and outrebounded the Batang Pier, but the Beermen shot poorly from long range and turned the ball over too many times. AZ Reid also seemed gassed in that game and even got injured, which means he’ll be a question mark in this encounter. If Reid is unable to play, the pressure will mount on the locals to step up especially against their perennial rivals, Alaska.

1. HENTON TURNS IT ON
– LaDontae Henton’s 27-point output in their lastgame may be a season-low for him, but he more than made up for on defense with a season-high 4 blocked shots. Henton carried the Aces on both ends, and that’s something they’ll expect of him again here against the Beermen. If Reid is indeed not 100%, look for Henton to really turn things on for ALA.

2. BEASTLY DOUBLE-DOUBLE
– Calvin Abueva finally logged his first double-double game of the conference with a 10-point, 10-rebound effort against STA. He also spiked that with 4 dimes, 3 swipes, and 2 blocks in a performance that showed us how well-rounded the Beast’s game actually is. He may have his hands full here trying to contain the likes of Gary David, Ronald Tubid, and Marcio Lassiter, but with his trademark motor, look for the Beast to make an impact for ALA.

3. ALA: MAGNIFICENT MOVEMENT
– ALA may not be among the top teams in terms of assists this conference, but in their last game, they showed how good they can be when their ball movement is on-point. The Aces assisted on 20 of their 35 made FGs in their win over STA, and that’s the kind of playmaking, the kind of passing they need to showcase here, especially against a team as big and deep as SMB. If ALA can have a high number of assists again, they should be in a great position to win.

4. SMB: AILING AZ
– AZ Reid dropped 41 big points in SMB’s last game, but he paid a big price for it by aggravating an injury. It was also for naught as the Beermen still lost to GLO. The implication is AZ may not be able to play or may not be 100% in this contest against ALA. That’s crucial, of course, because AZ does so much on both ends for the Beermen. This development means coach Leo Austria will have to look for other players who can step up and compensate for the loss in production that is likely to happen if Reid does sit this game out or is not 100%.

*Reid plays nearly 44 minutes a game. One may argue, in fact, that he’s being pushed beyond his limits because of the taxing playing time.

5. CAN THE KRAKEN TAKE OVER?
– With Reid possibly impeded and hampered by injury, the onus is on June Mar Fajardo to take over and carry SMB. He is coming off his fifth double-double of the conference, and he’ll need another one here if the Beermen are to put up a stiff challenge against a confident ALA quintet. Fajardo needs to establish himself in the paint, rule the glass, and be a playmaking catalyst if SMB is to get its fifth win.

*JMF turned the ball over 7 times against GLO. That’s one reason the Batang Pier were able to win, and that’s something that JMF needs to address here because turning the ball over that much would pretty much negate whatever production he puts up.

6. SMB: DRUNK WITH ERRORS
– Speaking of turnovers, the Beermen turned the rock over 18 times against GLO, and the Batang Pier promptly converted these into 25 points. That just won’t cut it, and SMB knows that. The Beermen need to take much better care of the basketball, and that isn’t just the guards’ responsibility. Reid & JMF are the most error-prone Beermen, so they have to take extra care of the basketball. This also means SMB’s playmakers need to find Reid and JMF in their prime spots to minimize any chances that they will cough the ball up.

7. KEY MATCH-UP: RJ JAZUL X ALEX CABAGNOT
– The duel in the backcourt is going to be crucial in this contest. Jazul is the more consistent sniper, but Cabagnot is surely the better defender and more versatile offensive operator. Jazul principally hurts opponents from the perimeter, while Cabaggie can drive, shoot, and find teammates for the easy baskets. Both guards, however, are coming off sorry performances in their previous games, so it’ll be interesting to see which one is able to bounce back in a big way and help his team prevail here.