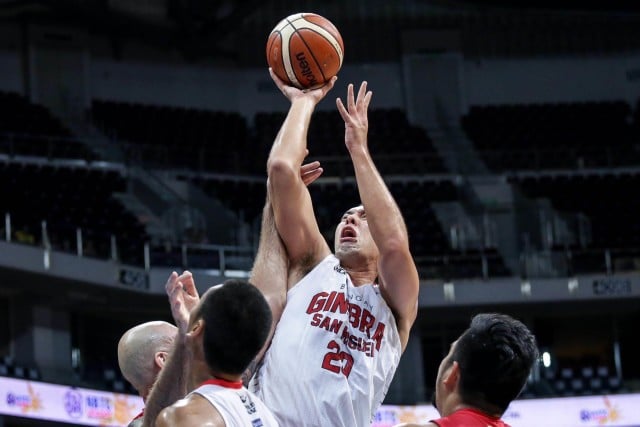 Saddled with an ankle injury for the better part of the conference, Greg Slaughter is about to make his comeback for Ginebra next Friday.

Ginebra head coach Tim Cone shared the good news following the Gin Kings’ 116-103 victory over Star on Sunday, giving the team an added boost up front as they eye to stay in the top four and enjoy a twice-to-beat advantage in the quarterfinals.

“He’s gonna start practicing fully this week. We’re hoping and we’re expecting him to play some minutes against Mahindra, but he’ll be coming off the bench and he’ll be playing limited minutes,” he said.

Watching in the sidelines on Sunday, Slaughter couldn’t handle his excitement as he nears his return to the hard court.

“I’m just really excited to get back out there, but it’s going to be coach Tim’s decision. I got about 12 more days before the next game so we’ll see how it goes in practice, going in contact with the team. I’ll leave it up to coach Tim to decide if I’m ready or not, but I feel ready. I can’t wait to be back out there,” the Cebuano giant said.

Ginebra takes on Mahindra on September 9, giving Slaughter ample time to get his rhythm and conditioning back.

Slaughter shared that he’s still nursing his ankle after undergoing surgery in the offseason. But what matters more to him is getting his timing back after a long layoff.

“My ankle gets a little sore when I run on it, but I think that’s just re-adjusting to movements. It’s been a while since I’ve been able to run like that. I think it’s a little weak right now, it should get strong enough soon,” he said.

And Slaughter is just elated to get the clearance anew, as he tries to get the best out of himself during recovery before joining the team’s practice sessions last week.

“I haven’t joined any contact. We’ll see. I’ve been trying to pick up our new offense and everything, getting into the flow of that. We’ll see how it is with some defense out there, try to get my rhythm back,” he said.

Cone, however, told Slaughter to slow down a bit.

“We’ll be bringing him back slowly. We’re not just gonna throw him out there and give him 35 to 40 minutes. We’re going to test him and slowly work him into the game,” he said.

Fortunately for the Grand Slam-winning mentor, he gets a bit of a luxury with the way the Gin Kings are rolling, as at 6-2, they are currently tied with Mahindra for second place.

“We’re playing pretty good basketball. I think there’s a choice here where he could either be a disruption, because we’re playing good basketball or he can be a bona fide extra weapon that takes us to a new level. And that’s really up to us as a coaching staff to make that happen. We think that with the things we’re doing, he’s gonna be highly successful so we’re excited about his return, but again, it’s going to be a slow process.”