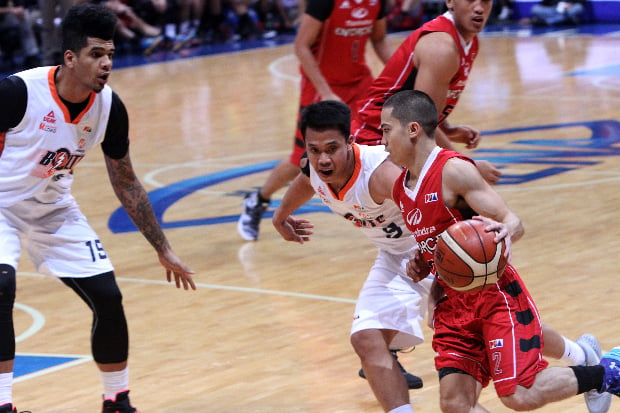 Both MAH and MER have won 6 games and lost 5 this conference. Together with ALA, they are tied for fourth place in the standings, though MAH and MER have the superior quotients and they will dispute the final top four berth and the corresponding twice-to-beat edge that goes with it. Of course, since the Enforcer and Bolts are set to face each other in the playoffs no matter what happens here, this is the first game in a virtual best-of-three affair.

In their previous match up this conference, MER squeaked past MAH, 86-83, last Sunday, Sept. 11. Import Allen Durham banked in the go-ahead two-pointer to give Meralco the lead for good, 84-83, with 46.5 ticks left in the game. Durham, who poured 20 of his game-high 34 points in the second half and had 17 rebounds plus 3 blocks, also secured possession in a mad scramble and sank two free throws for the final tally with 1.2 ticks on the clock.

MER’s win over MAH came at a crucial time for the Bolts as they had lost back to back games before that win. It was just the result they needed to end the elims on a strong note and have good momentum heading into the quarterfinals. MER did well defensively, forcing a lot of MAH turnovers, and if the Bolts can put a lot of defensive pressure on MAH again today, good things can happen.

MAH, on the other hand, are currently caught in a quagmire. They were 6-2 at one point, leading in the team standings, but they have since lost three straight games and are in the midst of a slump. The Enforcer need a big bounce back win here if they are to remain alive and regain some more momentum.

1. IMPORT WAR: WHITE X DURHAM
– James White has been the darling import this conference given how much he has helped MAH move up in the standings, but Durham has been a very solid performer for MER as well. White has the edge in size and length, but Durham seems to be the more versatile of the two.

2. BATTLE OF THE FLYERS: CANALETA X NEWSOME
– KG Canaleta used to be the best dunker in the PBA, but now a host of young guys like Newsome are out to be the king highflyers. KG has modified his game to be a shooter, while Newsome is one of the most versatile guys in the league, able to play as many as four positions. Of course, this is also a big question mark since KG didn’t play in their last encounter

3. FRONTLINE FRACAS: RAMOS X HODGE
– Ramos and Hodge have similar size but play quite differently. Ramos, like KG, likes to stretch the defense with his 3pt shooting while Hodge loves mixing it up down low. Ramos is more of a perimeter-based PF while Hodge likes to face up and aggressively attack defenders. It’s a great contrast in styles that should be entertaining to watch. Hodge would also love to bounce back after sputtering in MER’s win over MAH.

4. YOUNG & OLD: TAHA X DILLINGER
– Paolo Taha has been a key impact player for MAH so far, but he will have his hands full against versatile veteran wingman Jared Dillinger. Dillinger had a solid outing in MER’s win over MAH a few weeks ago, and the onus will be on Taha to try and contain the 6’5 Fil-Am this time around.

5. SCUFFLE OF THE SMALLS: REVILLA X ALAPAG
Alapag has been one of the best PGs in PBA history, and while Revilla still has a long way to go, he, too, has been highly touted, especially with how he has been playing for MAH. Revilla has shown flashes of playmaking genius akin to what Alapag has, and that makes this a very curious match up between two of the best PGs right now.

6. MAH: FORCE THOSE TURNOVERS
– In their last game, MAH did a good job forcing turnovers and scoring off these errors. That’s something they will have to do again for them to be able to have a shot at beating MER and halting their slump.

7. MER: BALL MOVEMENT SUPREME
– Ball movement was a boon for MER in their last game, and that’s one big reason they prevailed. With Alapag and Newsome doing well distributing the ball, MER was tough to beat, and if they are allowed to move the ball fluidly again, MER will be in a good position to win.