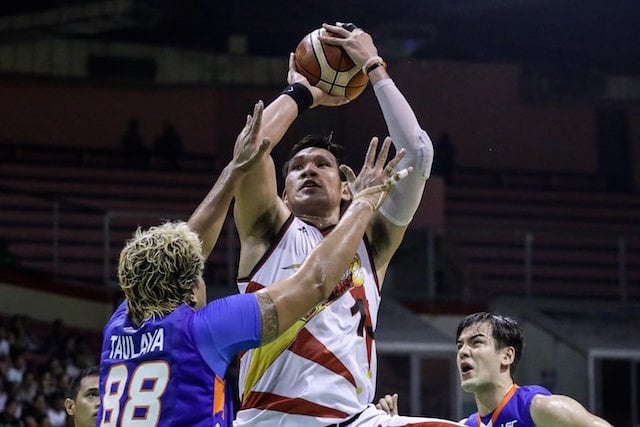 June Mar Fajardo is poised to snare his third straight MVP award as he leads the statistical race through the 2016 PBA Governors’ Cup quarterfinals.

Winning the Best Player of the Conference in the Philippine Cup, the San Miguel big man is way ahead of the pack, averaging 39.5 statistical points (SPs) for the season.

The 6-foot-10 Fajardo is also in contention for the BPC award in the season-ending conference, behind TNT guard Jayson Castro.

He can tie PBA great Bogs Adornado at second in the list if Fajardo goes on to come away with his third MVP award.

Meanwhile, Castro sits at second with his 34.7 SPs, followed GlobalPort’s Terrence Romeo at third with 33.5 SPs.

Completing the top five are Alaska’s Calvin Abueva, who was named as the Commissioner’s Cup Best Player of the Conference, with 32.1 SPs and GlobalPort’s Stanley Pringle with 31.2 SPs.

Meanwhile, Troy Rosario and Chris Newsome are in a tight race for the Rookie of the Year award.

Rosario, the second overall pick in the 2015 PBA Draft, has been the pacesetter all season long with the TNT forward ahead of the pack with 23.5 SPs.

Newsome, however, has caught up, with the Meralco swingman breathing down his neck with 23.4 SPs.