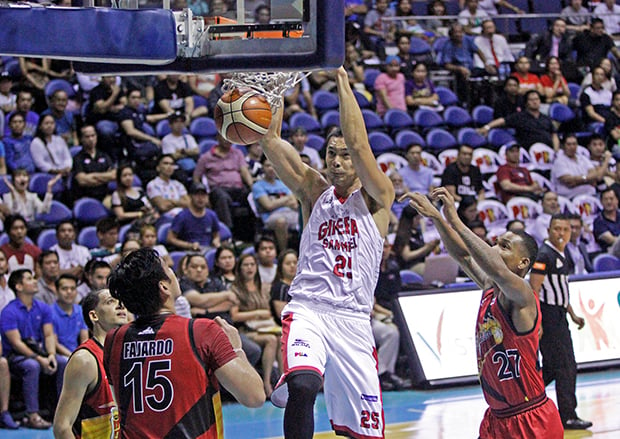 Barangay Ginebra worked on a wondrous effort versus San Miguel Beer in the opener of their PBA Governors Cup best-of-five semifinal series, fashioning out a come-from-behind 115-108 win before a good Monday crowd at the Smart Araneta Coliseum.

Justin Brownlee and Japeth Aguilar played solid games all night long while Sol Mercado, Scottie Thompson and Joe Devance hit their strides in the second half, teaming up to key their turnaround from a woeful first half.

“In that first half, it looked like we were totally overmatched. We looked like we didn’t belong on the same court. They were doing it with some ease and it was disheartening,” said Ginebra coach Tim Cone.

“But the guys came out and raised the level of their game, got things going their way and gained some confidence. I certainly didn’t have a lot of confidence in the first half. To their credit, they kept battling and battling,” Cone added.

The Gin Kings stunned the Beermen in Game One and would likely be in high spirit in Game Two set Wednesday also at the Big Dome.

“It doesn’t win a series. It’s not that big of a deal but it was a good win,” Cone said. “Game Two becomes a big deal. SMB will put this away and get focused on the next one. Somehow we have to come out and meet their intensity in Game Two.”

Brownlee was huge with 39 points and 16 rebounds while Aguilar stood tall with 22 points, including 10 in a decisive third-quarter romp.

But the Kings were able to make a turnaround only when Mercado, Thompson and Devance rose to the occasion in the second half.

Mercado was a big sparkplug in making 17 of his 19 points in the second half.

He hit from afar and on daring drives as the Kings rallied from a 13-point deficit and seized control with a 12-point lead at 92-80.

Thompson came up with a sterling all-around numbers with 11 points, 10 rebounds and six assists while Devance contributed 12 markers, seven boards and three dish-outs.

Except for Brownlee and Aguilar, the rest of the Ginebra players groped for form in the first half.

The Beermen set the pace in the first half with June Mar Fajardo getting his points at the paint and the SMB outside gunners also making their shots to enjoy an 11-point lead, 57-46, at the turn.

Fajardo, Elijah Millsap, Alex Cabagnot and Arwind Santos all had had double-digit outputs by the half with Marcio Lassiter adding eight, including two three-point bombs.

The SMB shooters combined for an impressive 9-of-18 treys in the first half as against Ginebra’s 3-of-14.