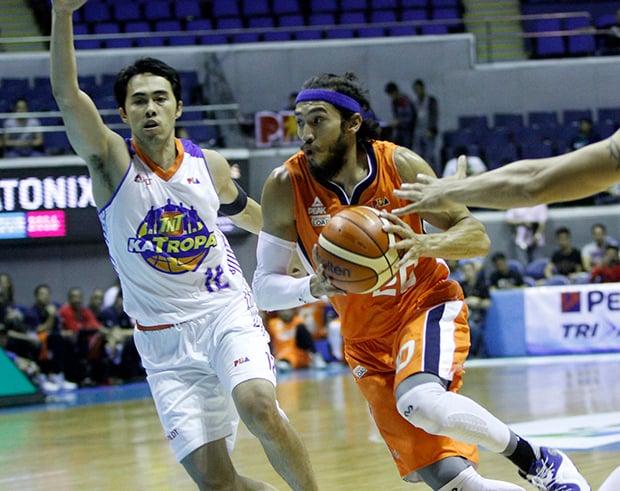 Sister teams TNT and Meralco are on a collision course, and we’ll see just much glory is thicker than blood between these two clubs. TNT and Meralco have players and coaches who have played on both sides, and that adds a lot of potentially dramatic flavor to this match up. Among these are Jimmy Alapag, Jared Dillinger, Rabeh Al-Hussaini, Jai Reyes, and, of course, coaches Norman Black and Jong Uichico. This is the first time in history, however, that TNT and Meralco are meeting in the semifinals, and though it seems like the “deeper” KaTropa should march on to the Finals unperturbed, the Bolts would want nothing more than to be the one to upend their “bigger sibling” and finally move up to join the cast of elite teams in the league.

Meralco and TNT have met 3x this season already, with TNT winning twice (PHL Cup & GOVS Cup). That means they may have a bit of a psychological edge in this encounter, but remember that guys like Jimmy, Jared, and Norman — being former TNT members — know how TNT plays (vice versa with coach Jong). If there’s any team in the league with enough players who have “inside info” about TNT, it’s Meralco, and there’s no better time for them to use that knowledge than in the semifinals now.

Meralco also has a bone to pick with TNT since the Ka Tropa handed Meralco their first loss of the Govs Cup after the Bolts started with back to back wins. Meralco beat PHX & Alaska in succession before TNT handed them a 98-95 loss thanks to 24 big points from Jayson Castro. For sure, Castro will be a marked man here, and guys like Chris Newsome, Cliff Hodge, Allen Durham, and Dillinger will be expected to carry much of the load on both ends for the Bolts.

– Mychal Ammons wasn’t around when TNT beat Meralco earlier this conference, so it’ll be interesting to see how he matches up with Allen Durham here. Durham struggled in that game, and for sure he wants to score a lot more here. Ammons, meanwhile, will have to assert himself in terms of scoring and rebounding to help TNT get the jump in Game 1.

– For the longest time, Jimmy Alapag served as a mentor of sorts to Jayson Castro, but now they find themselves on opposing sides with a berth in the Finals at stake. They know each other’s moves so well, and it’ll be interesting to see what the mental chess match is going to be between them.

– These two teams have relied on their respective Fil-Ams to give them boosts at different points this conference. The backcourt duo of Kris Rosales and Ryan Reyes has made TNT’s perimeter game more dynamic, while the wing pairing of Chris Newsome and Jared Dillinger have given Meralco a lot of depth, versatility, and athleticism. For certain, these Fil-Ams will play big roles in the outcome of this series, too.

– Ranidel De Ocampo and Cliff Hodge are two of the most versatile power forwards in the league. Both like to attack facing the basket, with RDO specializing in hitting the three and Hodge’s athleticism aiding him in being one of the strongest players not just for Meralco but for the PBA. Their battle in the paint will surely cause a lot of fireworks in this series.

– Rookies Troy Rosario and Mo Tautuaa have surely given TNT a lot of depth and muscle at the frontline, and the pressure will be on the veteran duo of Reynel Hugnatan and Kelly Nabong to try and contain TNT’s young frontcourt duo. Rosario’s outside shooting will stretch Meralco’s defense, and Tautuaa’s size will give Meralco a ton of match up problems, but coach Norman will probably try to counter this with the combined physicality of both Hugnatan and Nabong.

Last Game vs each other:

– MER currently is 2nd in the league in assists right behind GIN. With guys like Jimmy Alapag & Chris Newsome consciously looking for ways to get their teammates good looks, it’s no wonder Meralco’s offense has been buzzing. They’ll need to step up their game, of course, as TNT’s defense isn’t exactly easy to penetrate. If Meralco’s playmakers can move the ball well, however, that should be a good sign for the Bolts.

– Speaking of offense, however, nobody does that better than TNT, which leads the league in PPG. TNT is also 2nd in the league in 2pt & 3pt% as well as Fastbreak Pts. Coach Uichico’s wards are built for speed and scoring, and they will definitely put a lot of pressure on Meralco to keep up. In their last game, however, it was Meralco which shot a little better from the field and scored a ton in transition, so the Bolts may just have TNT’s number.

‘I will always speak up for you’: Server on defending Fil-Am family from racist rant