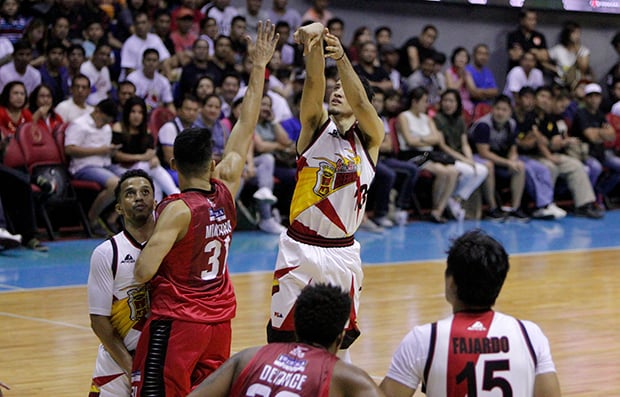 If there’s one thing Marcio Lassiter did to ease the pain of their Game 3 loss to Ginebra, it was shoot the lights out.

Lassiter scored 25 points, a team-high for the Beermen, and 21 of those came from the three-point line as he led San Miguel to a 101-72 win over the Gin Kings in Game 4 of their five-game semifinal series in the 2016 PBA Governors’ Cup Sunday at Smart Araneta Coliseum.

“I still feel it,” said Lassiter of Game 3 where Japeth Aguilar propelled Ginebra at the buzzer. “It doesn’t matter what happened now, we’re tied.”

“The goal is to win the series, we gave ourselves another chance to do that.”

Lassiter caught fire in the second quarter, where he scored 14 points, including four three-pointers, as the Beermen outscored Ginebra, 25-7, in the pivotal period.

“I got a good rhythm going and it kept flowing, when I got one I wanted to see if I could get another one, or just be aggressive,” said Lassiter. “After one went in, I kind of started feeling it so I just went and kept going until I missed.”

Lassiter said the Beermen won’t rest on their laurels for too long, and instead they have to come back in Game 5, set on Tuesday, hungrier than ever.

“We stayed alive today and Tuesday we’re going to come with the same kind of passion, grit, and aggressiveness,” said Lassiter.