Player of the Week: Meralco’s Hugnatan lights up TNT in semis 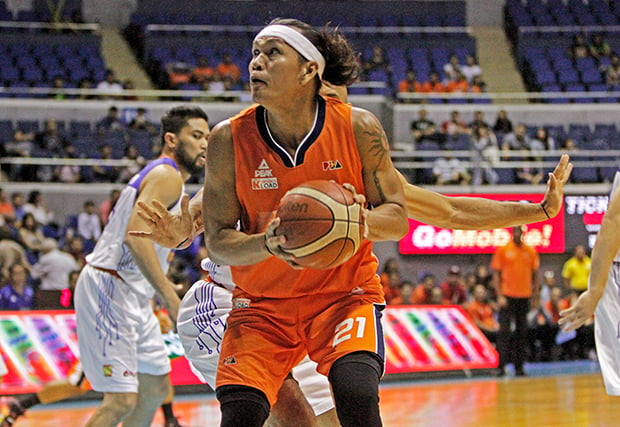 Veteran forward Reynel Hugnatan has always been known for his mid-range game and excellent footwork at the post.

But in Game 3 of Meralco’s PBA Governors Cup best-of-five semifinal series against top seed TNT, the 6-foot-4 Hugnatan unveiled his new weapon from the three-point zone.

The ninth overall pick in the 2003 PBA Draft went 5-of-6 from the rainbow arc, including two crucial triples from the corner during a dizzying 15-6 windup to lead the Bolts to a stunning 119-113 win against the Katropa on Saturday.

It was the second straight win for Meralco in a span of three days as the Bolts grabbed a surprise 2-1 series lead, leaving TNT teetering in the brink of elimination.

Meralco will try to finish off TNT on Monday night with a win in Game 4 to book a first-ever Finals trip in franchise history.

The 37-year-old Hugnatan averaged 16.5 points, 3.5 rebounds and 3.5 assists in the team’s back-to-back wins in the semifinals to earn the Accel-PBA Press Corps Player of the Week for the period of Sept. 26 to Oct. 2.

“He’s (Hugnatan) actually a pretty good three-point shooter, but I didn’t know that till I started putting the big men through some three-point shooting drill and he’ll end up no. 1 everyday,” Black said on his evergreen power forward.

“But he was given the green light to shoot when he’s open.  The only thing I asked him is that he takes the three-point shot from the top of the key, but he made a lot from the side (in Game 3),” he added.