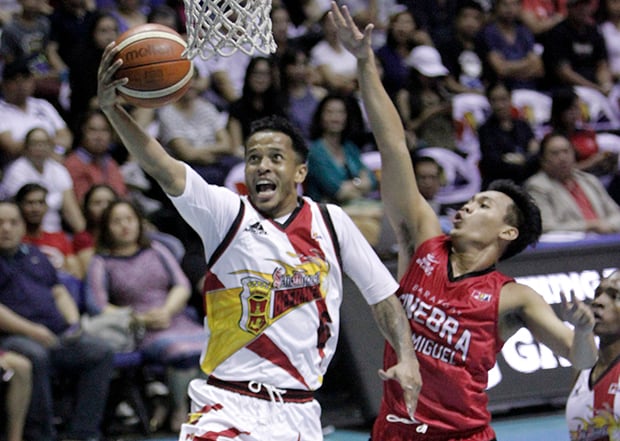 After splitting the first four games, titleholder San Miguel Beer and people’s champ Barangay Ginebra clash for one last time Tuesday, engaging in a royal knockout playoff for a spot in the 2016 PBA Governors Cup Finals.

Just like in any do-or-die match, it’s now more of a question of will and determination as the Beermen and the Kings knock each other out at 7 p.m. at Smart Araneta Coliseum.

Both are expected to go hammer and thongs at each other as they fight for all the marbles in their keenly followed best-of-five series that drew a crowd of nearly 23,000 in Game 4 at the Big Dome Sunday.

An even bigger crowd is expected in Game 5, majority of them will surely be the Ginebra diehards hoping to be counted as the virtual sixth man as the Kings fight an uphill battle versus experienced and tested SMB side.

Touched by the support of the Ginebra fanatics, coach Tim Cone promised they would make them proud in the rubber match.

“Such a beautiful crowd (in Game 4), yet we fell flat on our faces. We’re sorry to let the fans down. They were great even if we were not,” said Cone. “But we will pick ourselves up and fight for the fans in Game 5. We will make them proud.”

Meanwhile, SMB coach Leo Austria expresses confidence they can overcome Ginebra and stay in the hunt for a fourth crown in the last six conferences.

“The key is to hold down their three key players in Justin Brownlee, LA Tenorio and Japeth Aguilar,” said Austria. “We’re able to neutralize one of them (Aguilar) in Game Four at malaki ang naitulong noon sa resulta ng game.”

San Miguel fought with its champion’s heart Sunday – relentless and ruthless in stopping Ginebra, 101-72, to set the sudden death.

Gunners Marcio Lassiter and Alex Cabagnot came out firing, June Mar Fajardo asserted himself at the paint while Elijah Millsap and Arwind Santos struck from inside and out as the Beermen foiled the Kings’ first crack at the finals.

But both coaches have put behind them the result of Game Four.

“A 29-point win and a one-point win are the same. It’s one game. But I’m sure this will elevate the morale of the boys,” said Austria.

“In a big scheme of things, in a big picture, a 29-point loss is the same as a one-point loss. So we’re gonna take it for what it was. We’ll see how it goes in Game 5,” said Cone.

The two teams have engaged in a protracted war coming down to one last game that could be a virtual mortal combat.

“For us to win (the series), we have to play the game of our lives, all of us from the starting five all the way to the bench,” said Japeth Aguilar, eerily silent in Game 4 after being Ginebra’s hero in the previous match.

Read Next
Facing elimination, Beermen avoid early vacation
EDITORS' PICK
Get exciting deals and discounts when you download the new McDonald’s App
Beyond water service: Maynilad builds massive infrastructure projects to clean up Metro Manila waterways
Seventh judge assigned to handle De Lima case
PH preps for China virus: Question of when, not if
Museums ‘put to sleep,’ churches closed amid volcano’s unrest
SM continues to send relief assistance to remote towns in Batangas
MOST READ
Passengers from Wuhan, China to be flown out of Kalibo, Aklan – CAAP
Part of Aurora Boulevard in Cubao closed from Jan. 25 – Feb. 1
Lacson on Duterte’s threat to end VFA over Bato’s canceled visa: Where is the connection?
Seventh judge assigned to handle De Lima case
Don't miss out on the latest news and information.