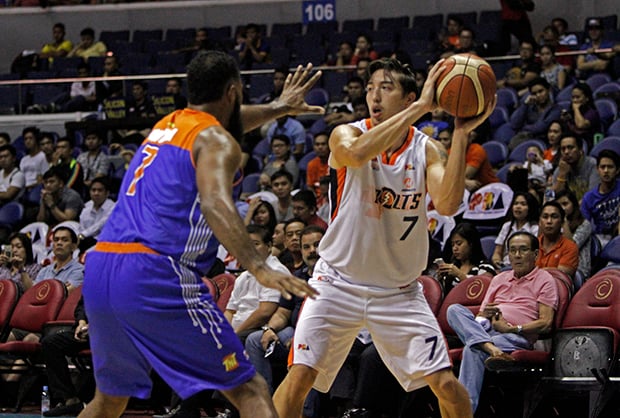 MERALCO is in the promised land and it took the unlikeliest guy to do a Moses and get the Bolts there.

Cliff Hodge scored a career-high 32 points to lead a bunch of gritty Meralco players who completed a gigantic upset of TNT Ka Tropa with a 94-88 win Monday to advance to PBA Governors Cup finals at  the Smart Araneta Coliseum.

Allen Durham, Game 3 hero Reynel Hugnatan and Chris Newsome did their part for the Bolts as they wrapped up the best-of-five series in just four games and realized a first-ever championship stint since joining the league in 2011.

The Bolts will next take on the winner of the other semifinal pairing between Barangay Ginebra and San Miguel Beer, set to be decided Tuesday, in the best-of-seven championship series set to start Friday.

At the same time, Meralco became the first PBA team in 15 years to finish dead-last in the season-opening Philippine Cup and advance to the season-ending tourney’s finals since Sta. Lucia Realty in 2001, also with now Bolts coach Norman Black at the helm. The Realtors won that one for their first-ever title.

“We’ve come a long way since the first conference,” said Black, who is now eyeing a 12th PBA title in this his 18th finals appearance as a coach.

“It’s not over yet, but I can’t be more proud of my players and am happy for the Meralco community.”

It was all about team effort, added Black.

“We knew coming into this series that individually we’re not as strong as Talk N Text, but we really focused on trying to being a team and focusing on doing whatever we have to do to win.”

It was a sad ending for TNT, which topped the eliminations, took just one game to finish off Phoenix in the quarterfinals and seemed well on its way after a 113-95 win in the series opener.

But Meralco, which came into the playoffs as the fourth-ranked team, bounced back through its more balanced all-around play.

Unwittingly helping the Bolts” cause was Texters star Jayson Castro, who was tossed for a second flagrant foul-penalty one against Newsome with still 2:20 to play. He was slapped with the same penalty in the first quarter, also against Newsome.

Ranidel de Ocampo and Larry Fonacier tried to pick up the cudgels for TNT as they combined for a 9-2 surge to whittle what was a 10-point deficit to just 85-88, still 63 ticks left.

But Durham capped a 19-point, 16-rebound and three-assist performance with a kickout to Hodge, who nailed his third three-pointer from the right side, making it a six-point game and taking the steam out of TNT’s fightback.

Hugnatan, who scored 21 points in a 119-113 victory last Saturday, wound up with 16 points, six rebounds and four assists and Newsome chipping in 15, eight and four.

The Texters actually led for majority of the way until just past the halfway point of the third quarter, when Hugnatan scattered six of his points during a 10-2 run to give the Bolts the lead at 60-55.

Ammons and Moala Tautuaa brought TNT within three at the end of the third period and Michael Madanly’s charity further trimmed the deficit to two to start off the fourth canto.

Still, Meralco stood its ground, notwithstanding Castro taking over for TNT by scoring 10 of his points to keep the Texters within 76-83.

Newsome converted just a charity off the F1 but Hodge  converted a turnaround jumper in the ensuing possession to make it a 10-point game, 1:36 left.