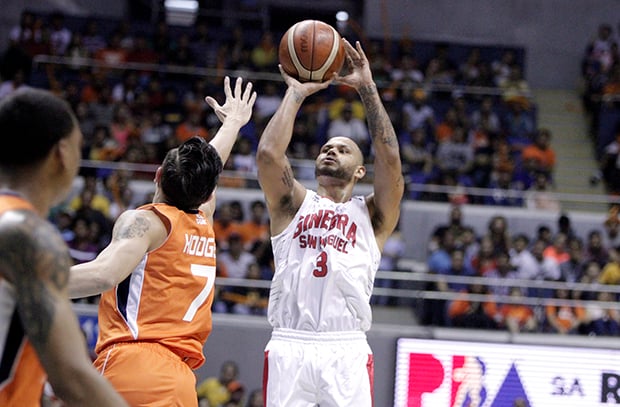 Sol Mercado may have found a new niche as part of the vaunted three-guard lineup of Barangay Ginebra.

Playing the small forward position, the veteran guard has been making the Gin Kings’ small ball run look good against Meralco as it knotted their Finals series at 1-1.

After Durham went crazy with 46 points and 13 rebounds in Game 1, the newly-crowned Best Import was limited to 22 points, on 42 percent shooting, and 15 rebounds.

Mercado, though, shared the praise to his teammates after holding off the Bolts, 82-79, Sunday at Smart Araneta Coliseum.

“It wasn’t just me guarding him, it was all five of us, it was a collective team effort to at least hold him down a little bit,” said Mercado. “I take pride on my defense, stay in front of bigger guys and use my strength to prevent them from getting to their spots.”

“I was excited and took the challenge head on.”

Mercado’s role in Game 2 wasn’t an in-game adjustment, but he got the marching orders a little bit earlier after Gin Kings head coach Tim Cone told him he would mark Durham from the tip to the final buzzer.

And Mercado did just that as he bodied up Durham in the waning seconds forcing the import to put up a contested shot with Ginebra leading, 81-79.

Despite being the primary guy on Durham, Mercado said the Kings still had to put different defenders on Meralco’s big man to throw him off his game.

“We wanted to give him different match-ups, so he couldn’t get comfortable,” said Mercado, who had 12 points. “It was me, Justin, and Japeth guarding him differently throughout the whole game.”