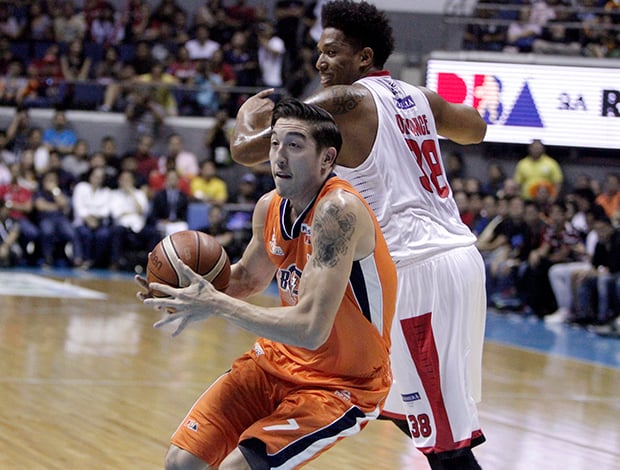 After four amazing games, we’re back in square one, with Ginebra slipping past Meralco in Game 4, 88-86. Much like Game 2, the Kings made the bigger plays down the stretch, though they had to mount one final defensive stand to stave off the Bolts. Chris Newsome was shadowed well by Justin Brownlee in the final seconds of the game to force a miss and preserve the win. With the series tied at 2-2, Game 5 is a bonafide danger zone where the winner reaches the cusp of winning the title and the loser reachers the edge of being knocked off.

Meralco actually looked well in control of the game after outscoring Ginebra, 39-12, in the third period, where they turned an 11-point halftime deficit into a 16-point lead entering the final frame. Ginebra, however, buckled down on defense in the fourth quarter to slow the Bolts down. That’s certainly something Ginebra will need to do more of as the series progresses because the Bolts have shown that they are a very explosive unit.

The Bolts squandered a golden chance to take a commanding 3-1 series lead, and this loss will haunt them, but they cannot let it get to their heads too much because they still have a very solid shot at winning the title. They need to get their act together in the next few games, be more consistently effective with their execution, and play smart basketball in order to notch their first title in franchise history.

– Japeth Aguilar was a bit of a missing piece for Ginebra in games 1 & 2, but he has since stepped up for the Kings. He has played more efficiently in games 3 & 4, and that’s something he must continue to do if Ginebra wants to snare this crown from Meralco.

– It’s plain and simple, really — when Sol Mercado plays well, the Gin Kings win. That’s what we’ve seen so far in the first four games, and, for sure, coach Tim Cone is hoping his experienced, burly, explosive guard can break out for another big offensive game in Game 5.

– If Mercado is the barometer for Ginebra, then the old school duo of Jimmy Alapag and Reynel Hugnatan is the barometer for Meralco. The Bolts win when these two veterans play well. As talented and athletic as Chris Newsome and Cliff Hodge are, it’s clear that Meralco can only beat Ginebra if their old-timers also put up big numbers.

– Allen Durham continued to prove he was the conference’s best import by pouring in 34 points in Game 4, but it went down the drain as Meralco still lost. Still, Durham must continue to have that killer instinct and continue to put the pressure on the Ginebra defense. If Durham has a bad game, the Bolts may not even put up much of a fight.

– Ginebra should feel lucky they won Game 4, especially with Justin Brownlee going ice cold from the field. The Kings surely want their import to have a good bounce back performance in Game 5, though, because they know they probably cannot survive if he shoots this badly again.

– What would Ginebra do without its Fast & Furious duo? Jayjay Helterbrand and Mark Caguioa both stepped up big time for Ginebra in Game 4, and they gave the Kings the lift they needed to pull the rug from under the Bolts. If these two can be more consistent with this kind of production, then Meralco better watch out.

7. ROOKIE OF THE YEAR: CHRIS NEWSOME

– Fresh from being named Rookie of the Year in the Leo Awards, Newsome once again showed good quality in Game 4, but a couple of miscues (bad pass and last second miss) in the endgame cost them the win. There is no doubt that the youngster has star potential, but his decision-making will need to be better if Meralco is to get over the hump here.

– Throughout the first 4 games, one things has been made clear — Meralco is the better outside shooting team. They will need to leverage that again, like they did in Games 1 & 3, for them to steal Game 5 and move within a win of the crown. Guys like Durham, Hodge, Alapag, Hugnatan or even Uyloan have to make their threes for Meralco to prevail.

– The oft-used cliche “Defense wins championships” is probably a mantra coach Tim Cone has ingrained in the Gin Kings, since they have been the better defensive team through 4 games. They have more steals, blocks, force more TOs, and score of these TOs. No doubt, they will need to continue doing that if they are to win against Meralco not only in Game 5 but for all the remaining games in the series.