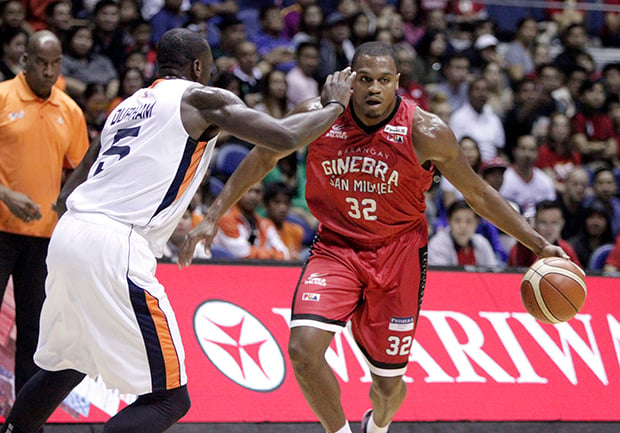 Justin Brownlee came up big with 29 points and 10 rebounds two nights after a subpar showing in the Gin Kings’ 88-86 victory in Game 4.

The Kings saw their 21-point lead dwindle to five with 3:04 left before a triple by Sol Mercado and an inside basket by Brownlee stretched it back to 10, 87-77, with 1:28 remaining.

“Things kind of came together for us tonight and that’s the first time in this series that’s happened where we got a little bit of defense and we got a little bit of offense together,” said Ginebra head coach Tim Cone, who is in his first year at the team’s helm and is now a victory away from ending the franchise’s eight-year title drought. “We played more of a complete game.”

“But they knocked a 20-point lead down to five so we still didn’t keep the distance that we would like. But in the Finals, it’s really, really difficult to hold leads,” added Cone.

Ginebra shoots for the championship Wednesday night also at the Big Dome.

Kings rookie Scottie Thompson only had five points, but had the highest plus-minus with 12 and his lone field goal—a 3-pointer to beat the shot clock—put the game away, 90-81, with 44 seconds to go.

LA Tenorio kept Ginebra afloat amid a Meralco comeback. He finished with seven points, five rebounds and eight assists with zero turnovers in over 32 minutes of play.

Allen Durham had 20 points and 18 rebounds for the Bolts, who allowed the Gin Kings to shoot 52% from the field.

Reynel Hugnatan added 17 points on 3-of-6 shooting from deep for Meralco, which failed to make the most out of its trips at the free throw line going just 13-of-20.

Two nights after their inspiring play in Game 4, Ginebra’s “Fast and Furious” backcourt of Jayjay Helterbrand and Mark Caguioa proved they still have a lot left in their tanks.

The 40-year-old Helterbrand, who led the Gin Kings’ fourth-quarter rally on Friday, scored all of his six points on 3-pointers while Caguioa had eight points for the second straight game.