Durham confident Meralco can pull off two straight vs Ginebra 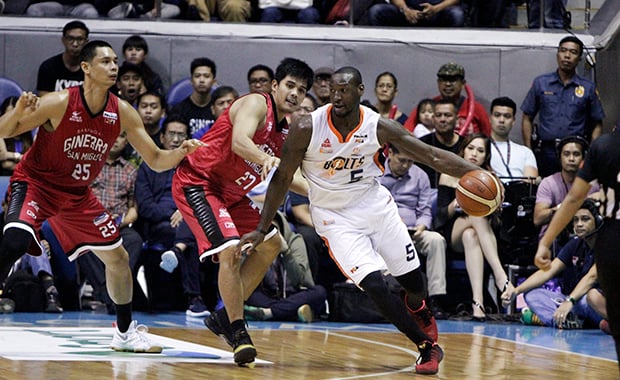 Allen Durham admitted he was thrown off his game by Ginebra’s defense in Meralco’s 92-81 Game 5 defeat Sunday in the 2016 PBA Governors’ Cup Finals.

“They did some different things defensively and they did where they put the ball out of my hands. They haven’t done that the whole series,” he said.

Not helping was his sluggish start as he struggled to get himself going with a four-point performance in the first half.

Still, if the second half was any indication, the Bolts found some positives after fighting back from a 21-point deficit and trimming the lead down to five, things which in Durham’s mind, they can utilize in their do-or-die Game 6 on Wednesday.

“I think we figured it out in the second half. I had some good shots, but I just missed them. I just have to make those,” he said after finishing with 20 points on an 8-of-15 shooting from the field, on top of 18 rebounds and six assists.

“We got to look at the film and see how I can get more touches when they put defense on me. We’ll see what works for us and hopefully, we start the game better.”

Durham is also staying positive even with Meralco having its back against the wall on Wednesday.

“This season has been nothing but adversity for us. We got a type of team that can bounce back and we can win those next two games, but we got to have better starts than how we did tonight,” he said.