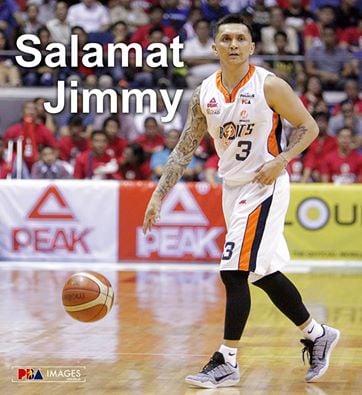 Jimmy Alapag has called it a career, this time for good.

The Meralco guard announced his second retirement through Eric Menk’s YouTube account on Thursday, finally shutting down a memorable career that has spanned for 13 years.

“I’m here to announce that I won’t be coming back for the upcoming PBA season. It’s been an amazing 13 years, but turning 39 next month and having left everything I have on the basketball court, it’s time to walk away for good,” he said.

Alapag was named as the 2003 Rookie of the Year and was honored as the 2011 Most Valuable Player during his time with TNT.

He also finished his career with six PBA championships, as well as a pair of silver medals in the Fiba Asia Championship.

Alapag first retired back in 2015 with TNT, and was even named as the squad’s team manager.

He made a comeback this season with Meralco, helping the Bolts reach the 2016 Governors’ Cup Finals before losing to Ginebra in six games.

“This past season with Meralco, I was joining a team that was much younger than the TNT team I used to play for. It was a big challenge but we had a great group of guys and a great coaching staff,” he said. “To be a part of the process, building from our struggles in the All-Filipino, going 1-10, and steadily improving as the season went on, going to the semifinals during the second conference, then ultimately going to the finals in the Governors Cup. To be a part of the process for that team was really special.”

In the process, Alapag also took the record for most all-time three-pointers made, elapsing Allan Caidic for the honor with his 1,250 treys made.

“One of the reasons for coming back, aside from the challenge of leading a young team to compete for a championship was my family. Especially with having two kids, having them along in the journey was really special. It gave me extra motivation,” he said.

“Now that I’m walking away from the game, the leadership and the passion that I play with for so long, I can now channel that to mentor a lot of the younger players in the Philippines and hopefully impact their careers.”

Alapag ended: “It’s been an amazing 13 years and it’s been even more special that you were there for me all the way. I love you and I look forward to more challenges.”