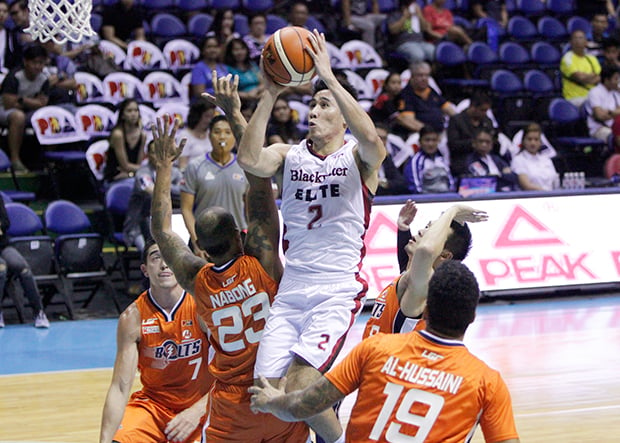 Rookie Mac Belo followed up his impressive debut with another sterling performance while veteran guard Denok Miranda made the go-ahead play and Blackwater upset Meralco, 86-84, in the 2017 PBA Philippine Cup Sunday at Smart Araneta Coliseum.

Belo led all scorers with 25 points while Miranda hit the game-winning basket on a tough drive with 3.8 seconds left to propel the Elite to their first 2-0 start in franchise history.

“We challenged Meralco all the way and true enough, Denok Miranda was able to hit the difficult play. Defensively we held our own against the top Meralco offense.”

The 6-foot-3 Belo also had six rebounds, three steals and two blocks while Miranda wound up with 11 points and seven assists.

“The last play was an option for anybody actually. The other four guys could have taken the last shot but the veteran that he is, Denok Miranda rose up to the challenge.”

Cliff Hodge topped Meralco, which is playing its first game since losing to Barangay Ginebra in Game 7 of the 2016 Governors’ Cup last month, with a near triple-double of 14 points, nine rebounds, and eight assists, while Chris Newsome and rookie Jonathan Grey got 11 markers apiece in a losing effort.

After shining with 17 points in his debut in a 94-87 victory over Phoenix on Wednesday, Belo became the first rookie to be named Best Player of the Game in his first two outings since Paul Lee in 2011.

“Like I said, all he has to do is stay disciplined, follow instructions from the coaches and he will be the player he is projected to be,” Isaac said of Belo, who fired 21 points in the second half including 14 in the final frame.