Grey has solid PBA debut in Bolts loss to Elite 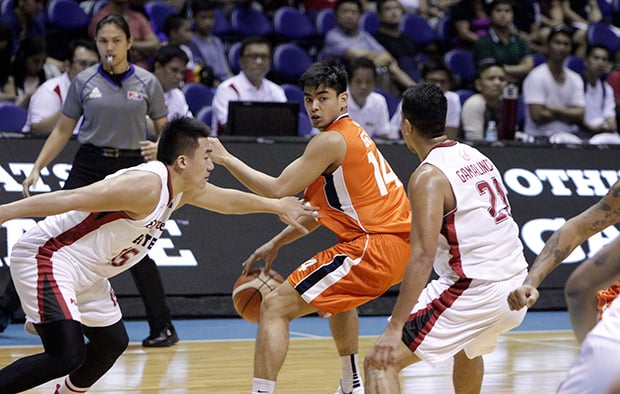 As promising as his first game was, Jonathan Grey’s focus is on Meralco’s success.

That’s why he doesn’t want to put too much on the 11 points and four rebounds he posted in his PBA debut, but rather rue the Bolts’ 86-84 defeat to the Blackwater Elite on Sunday.

“It’s a learning process, but we lost, so what’s the point of my 11 points, right?” Grey said.

Though Grey knows he turned heads with his performance, what he wants to look at more is the things he could’ve done better.

“What I’m looking at is my weaknesses. I want to improve more on my defense because that’s where I could improve on,” he said.

The former St. Benilde star still shared that at times, he still feels a bit hesitant shooting the ball being a newcomer, but his veteran teammates keep on egging him to utilize his strengths, which is scoring.

“Though at times, I feel shy doing such, I don’t see them getting mad at me and my teammates even ask me why I hesitate. So I just try to feel confident shooting whenever I have the ball,” he said.

Though disappointed with the outcome, Grey is elated to get that first game out of the way.

“I’m happy that I played well in my first PBA game. It’s a dream come true for me,” he said.

ADVERTISEMENT
Read Next
De Ocampo leads TNT rally past Ginebra
EDITORS' PICK
Sex on the menu for Pogo workers
First female commodore named
Foreigners prepare to flee as China virus toll tops 100
We Can’t Guarantee You’ll Win a P20 Billion Jackpot, But We Can Help You Try
SM continues to send relief assistance to remote towns in Batangas
Best Gift Ideas in the Philippines
MOST READ
Sex on the menu for Pogo workers
‘Normal people doing normal work’ need not wear mask – WHO official
Kobe Bryant gear pulled out of Nike online store in wake of his death
Lacson on VFA impact study: ‘Better late than never’
Don't miss out on the latest news and information.