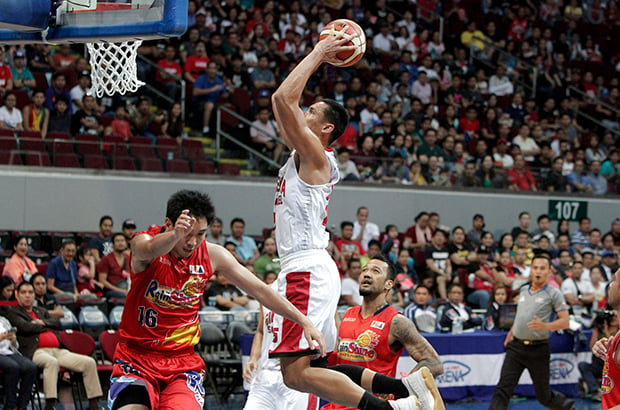 Barangay Ginebra steeled itself at the finish, coming away with a decisive 11-to-nothing closing flurry to top Rain or Shine, 81-74, in a duel of champs in the 2017 PBA Philippine Cup at the Mall of Asia Arena in Pasay City Sunday night.

Japeth Aguilar, Joe Devance, LA Tenorio, Sol Mercado and Chris Ellis formed a solid unit at endgame, getting the Kings through a tough grind versus the E-Painters and into a first win since their recent Governors Cup title run.

In topping the E-Painters, the Kings brought down the Commissioner’s Cup champs to joint second with San Miguel Beer, TNT KaTropa, Blackwater and Phoenix at 2-1 and left Globalport as the solo leader at 2-0.

Ginebra and Rain or Shine engaged in a nip-and-tuck battle, with the Kings prevailing as they held the E-Painters scoreless in the last four minutes of the game.

The Kings broke into the win-column after a losing season debut versus the Texters. The E-Painters, meanwhile, suffered a first loss after a two-game run against the Texters and the Mahindra Floodbuster.

“Rain or Shine is playing great basketball,” said Ginebra coach Tim Cone, making a big sigh after they got by the E-Painters.

Trailing by four at 70-74, the Kings spurted ahead to stay on two free throws by Aguilar, a jumper by Mercado and a short stab by Devance.

Aguilar made another key basket a little later to ice their win and cap a solid double-double game with 23 points and 13 rebounds.

The athletic 6-foot-9 player held his ground against ROS big men Jay Washington, Beau Belga, Raymond Almazan and Jewel Ponferada, playing a key role in the game they won despite the team’s woeful 0-of-14 three-point shooting.

The E-Painters didn’t shoot from the outside well either, converting only six of 41 three-point tries.