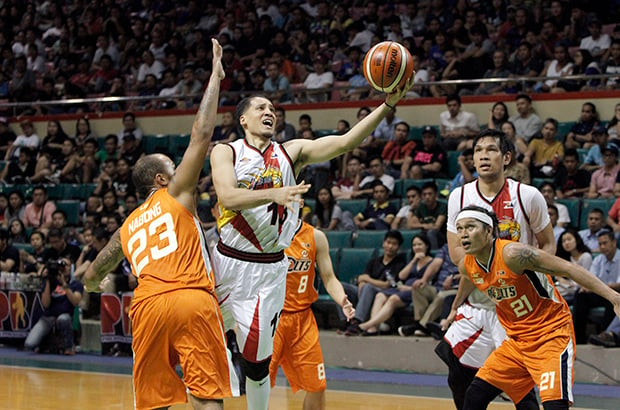 San Miguel Beer was a firecracker crackling and spitting sparks all game long in a 101-86 demolition of Meralco in a PBA Philippine Cup pre-New Year presentation at Cuneta Astrodome in Pasay City Wednesday night.

The Beermen torched the Bolts right in the opening quarter and lit the board all throughout in a relatively easy victory that kept the team ahead of everybody with a 5-1 win-loss record.

“We showed tonight the game that we can play,” said San Miguel coach Leo Austria. “If we’re to be consistent in things we want to do, maganda talaga ang magiging resulta.”

SMB blasted off the starting block, stormed to a 58-27 lead and coasted to the 15-point triumph.

Before a good crowd that included US ambassador Sung Y. Kim, San Miguel dealt Meralco a severe beating that sent the Bolts deeper down the team standings at 2-4.

The US envoy did the ceremonial toss in the game where the Beermen buckled down to work right at the start.

Alex Cabagnot, Chriss Ross, Marcio Lassiter and Arwind Santos got the Beermen to a rousing start, then Ronald Tubid and Yancy de Ocampo came off the bench firing as SMB took the opening quarter at 32-13.

The Beermen flared up in the second quarter and thus sat on a huge 31-point cushion at the half.

The Bolts tried hard to wage a fightback but could only come to within nine in the fourth quarter.

Though failing to finish the game with a busted nose inadvertently inflicted by Cliff Hodge, Cabagnot scored 20 points, including 3-of-5 three-pointers.

June Mar Fajardo made only 11 markers but grabbed 14 rebounds.

“June Mar made little noise offensively but he was there on defense,”