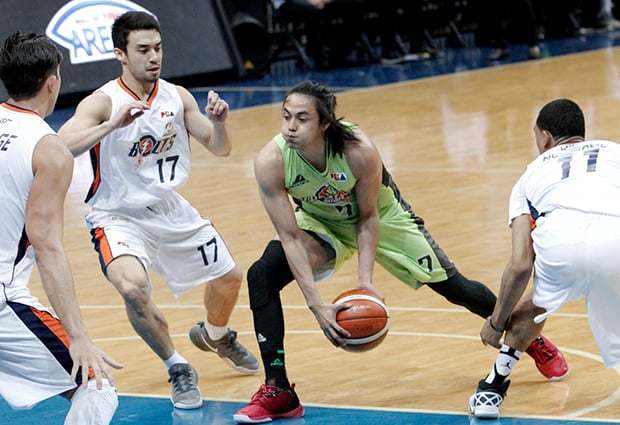 As hard as it is to defend Terrence Romeo, the job gets tougher now as the scorer slowly evolves into a playmaking guard.

“It keeps you on your toes a lot more,” he said. “You can’t just hard show or you can’t double-team him because he is a willing passer, so he’ll make the right play majority of the time, and that comes down to playing team defense in order to stop somebody like that.”

Romeo has been nothing but stellar this conference, topping the league in scoring as expected with his 27.0 point average.

What’s makes him deadlier, however, is the facet the Scoring Champion has developed in the offseason.

Often criticized for his unwillingness to pass the ball, Romeo has shown he is more than just a lethal scorer. And through seven games, Romeo is leading the league in assists averaging 6.1 per game.

The Bolts saw first-hand how hard it was to go up against the new and improved Romeo as the former Far Eastern U star took the backseat as the rest of the Batang Pier erected an early 16-point lead before sealing the game in the end with 12 of his game-high 27 points coming in the fourth.

“It’s always a tough matchup because you know he’s going to go for it almost every possession. You have to be aware of what he’s doing, where he is at all times. He’s just a great player,” said Newsome.

“It’s no secret that Terrence is one of the premier scorers in this league, so he did what Terrence does and for us, it was about shutting down the other guys, because we knew Terrence was going to come out and score.”

Although Meralco did a great job in shutting down Stanley Pringle, that wasn’t the case for the others as Romeo anchored GlobalPort to its fourth win in seven games.

“Of course, we wanted to limit Stan. He was below his average, but what hurt us was a lot of other guys got above their average, so it kind of defeated the purpose of the game plan,” he said.

The Bolts stumbled to their fourth straight defeat and at 2-5, are in danger of missing the 2017 PBA Philippine Cup playoffs.