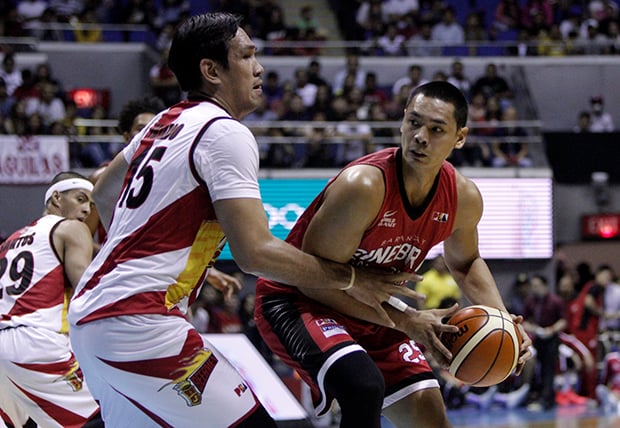 Alternating wins and losses through their first seven games, the Gin Kings have struggled to consistently churn out performances worthy of a winning streak.

Though there were positives like the way it performed against San Miguel on Sunday, the team still drew the short end of the stick, with the game ending in a 72-70 loss.

Japeth Aguilar is happy to see Ginebra fighting until the very end as it almost overhauled a 10-point deficit and nearly forced overtime had LA Tenorio’s floater connected in the clutch.

“I’m happy with the team’s effort. We battled from first to the last second. I think we put up a great defense but that’s why San Miguel is the defending champion because they find ways to win,” he said.

The lanky forward put up 17 points, 12 rebounds, and two blocks in the close shave, but that still wasn’t enough to string a pair of victories for the crowd darlings.

“We still need that fluidity because sometimes, we get lost in our system. We tried to win this game so that we’ll have momentum in our last four games but it didn’t go our way.”

Scottie Thompson sees it another way, noting that the Gin Kings must move past from the euphoria of their Governors’ Cup championship and focus on the task at hand.

(Before, Justin was there for us. But now, Justin is no longer here so we need to take over. Maybe that’s what’s confusing our team, what our roles are.)

The Gin Kings, though, are holding their heads high as they remain positive going into the last four games of the eliminations.

“It’s back to the drawing board for us. We’ll look at the things we can improve on and hope we can sustain our effort,” Aguilar added.

Ginebra returns to action Saturday against Meralco in Iloilo before bracing for Blackwater, Phoenix, and NLEX to wrap up its elimination round.