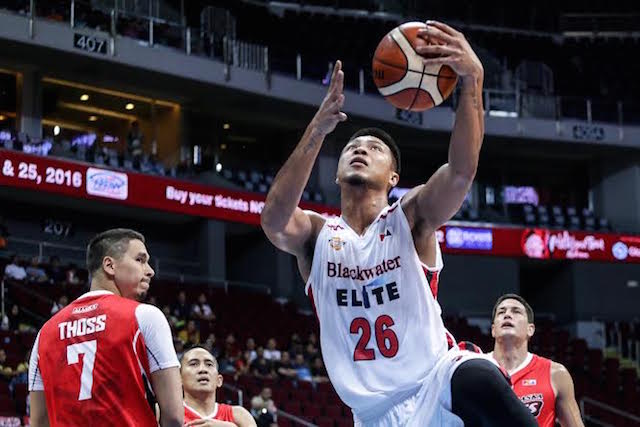 Blackwater’s Reil Cervantes goes for a layup against Alaska during their game on Friday at Mall of Asia Arena. Tristan Tamayo/INQUIRER.net

Alaska and Blackwater aim to boost their respective and slightly differing intentions when they clash Sunday in the 2017 PBA Philippine Cup at Smart Araneta Coliseum.

The Aces are gunning for a second straight win that would push them alongside idle Rain or Shine and GlobalPort at second-running spot.

The Elite, on the other hand, are eyeing to cut short a two-game skid while boosting their bid for inclusion among the top eight teams moving on to the quiarterfinals.

As things stand right now, six is the magic number needed to claim at least a playoff spot so a loss would not only stall but also jeopardize the drive of either combatant and these facts are not lost on both.

More so for Blackwater.

“We need to get back into our winning ways and that has to start tomorrow in our game versus Alaska,” said coach Leo Isaac, whose Elite still have Barangay Ginebra and Star as their remaining eliminations assignments.

“We need a lot of energy to accomplish this.”

The Aces have already shown they are not ones to lag at this stage of the season-opening tournament by outlasting Star 97-90 in overtime last Wednesday despite coming off a long 19-day break.

Alaska would not like nothing more than gain more momentum going into their final elimination games against resurgent Mahindra and dangerous Phoenix.

Locsin blames US for loss of Panatag shoal to China