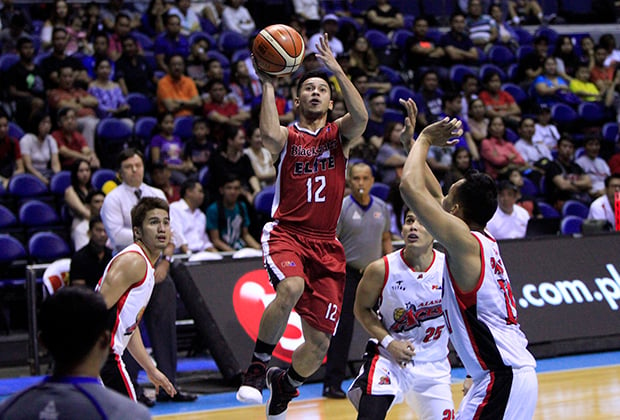 Roi Sumang was rarely given the chance to finish a game for Blackwater.

The former University of the East standout was there to polish it all up Sunday and did it with aplomb in helping the Elite stun Alaska 103-100 to get back in the winning track in the PBA Philippine Cup at the Smart Araneta Coliseum.

Mac Belo notched a team-high 21 points he capped with a dry spell-snapping trey, but it was the diminutive Sumang who stood tallest in the endgame with six straight points that kept Blackwater’s head above water.

Alaska’s last gasp came through a Calvin Abueva short stab that made it 100-101, but Denok Miranda highlighted Blackwater’s poise by sinking two charities that made it a three-point game, a count that stood when Abueva missed a corner triple try.

The win snapped the Elite’s two-game skid and jacked their overall record to 5-4, good for at least fifth depending on the outcome of the match between 4-3 TNT KaTropa (4-3) and Star (3-4) later in the evening.

Blackwater can still formally clinch a second straight playoffs appearance in the season-opening tourney if it wins against either or both Barangay Ginebra and/or Star in its remaining eliminations assignments.

The loss dropped Alaska to an even 4-4 and a share of sixth with idle Phoenix.

Abueva and Jayvee Casio  each wound up with 23 points while Vic Manuel had 13 for the Aces, who are now hard-pressed to prevail over Rain or Shine, Mahindra and Ginebra to advance.

The win also moved Blackwater within another of formally clinching a slot in the quarterfinals and the way his charges more than matched the Aces’ energy and vaunted pressure defense pleased coach Leo Isaac more.

“We really prepared hard for this game,” said Isaac. “In the nine days since our last game, isa lang ang sinabi nain sa kanila: if we want to beat Alaska, we’ve got to have the same energy, maybe more than they have. They’re really playing with a lot of energy, so we cannot relax. That was the challenge.”

Sumang finished with 19 points, 10 in all in the fourth period, with Ronjay Buenafe adding 16, foul-plagued Art dela Cruz 13 and Raymond Aguilar 10 spiked by a clutch rainbow shot during Blackwater’s surge in the fourth quarter.

Alaska actually won big in the battle of the boards 53-34, but Blackwater was plus-one in points off turnovers and plus-two in fastbreak points.

“All our players gave their best, so I guess we were able to match, even surpassed, the energy Alaska has been showing,” noted Isaac.

That energy and grit was displayed by Blackwater when it fought back from nine points down in the third period to erect as much as a 92-78 spread, off Aguilar’s shotclock-beating triple, 5:46 left in the game.

But Casio led a spirited Alaska charge by scoring eight of his points over the next three minutes and Abueva chipped in three that whittled the deficit to 89-92.

Belo’s triple broke Blackwater’s silence, but Alaska kept threatening and it was good a thing Isaac had Sumang on court to finish up the job.

“He’s Roi Sumang. We all know what he’s capable of even in college,” said Isaac of Sumang, who missed only three of his 10 field goal attempts and also had three steals, and two assists in a little over 22 minutes of action.

“Tiyempo-tiyempo lang,” said Isaac.  “He got rewarded for playing well.”