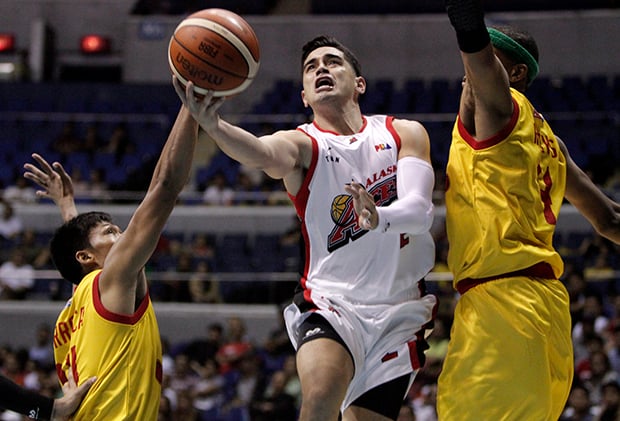 After getting their starting center Sonny Thoss back, the Aces were dealt with another injury after guard Chris Banchero reinjured his left hand last week against Star.

“I broke it,” Banchero said as he watched Alaska’s sorry 103-100 defeat to Blackwater on Sunday with his hand heavily bandaged.

“I hurt it during the TNT game. We had a long break and then I came back and played. I hurt it again when I played against Star and I played the entire game. It was so painful that I needed to get an x-ray. They found a broken bone in there and I got to rest,” he said.

Banchero’s injury couldn’t have come at a worse time with the Aces still finding their footing with injuries on their big men.

Noy Baclao has been ruled out for the conference with his knee injury, while Thoss is still trying to get back into his old form.

“We’ve had a rough go with it with injuries this conference,” Alaska coach Alex Compton said. “We just had a bunch of stuff happen. That’s not a complaint, that’s a fact of life in basketball.”

Banchero has been stellar so far in the 2017 PBA Philippine Cup, averaging 7.3 points, 5.4 assists, and 2.9 rebounds through seven games.

Despite his absence, the Fil-Italian guard has his full trust on his team, knowing that the Aces can still make a run.

“It’s a tough time to be injured, but I think they’ll take care of business and I’ll be ready come playoff time. It’s tough, but we have so many guys who can step up and make plays,” he said.

Banchero also noted the loss to the Elite is just a slight hitch on the team’s trek back to the playoffs.

“We weren’t focused for all four quarters today. We have to watch games to get better. We still have three games remaining and we got to win,” he said.