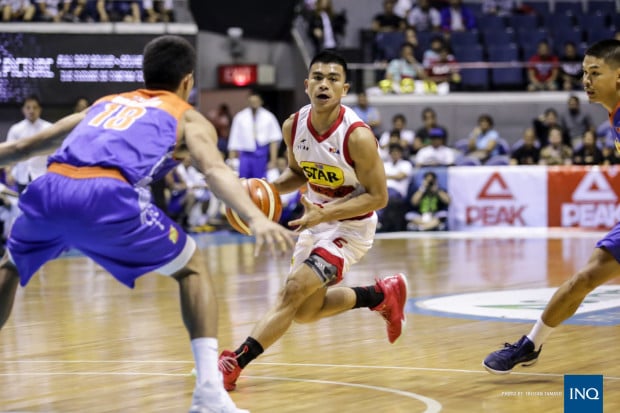 Idol or not, Jio Jalalon isn’t backing down from Jayson Castro.

In his fist matchup against Asia’s best point guard, Jalalon managed to stand his ground and eventually helped Star get an 88-77 win over TNT in the 2017 PBA Philippine Cup Sunday at Smart Araneta Coliseum.

Jalalon had nine points and four rebounds in 23 minutes of play while Castro played for 37 minutes and finished with 16 points.

“Maganda experience ko kay kuya Jayson and na-excite ako dahil sa kanya (It was a great experience playing against Jayson and I was really excited to play against him),” said Jalalon.

There were instances where Jalalon and Castro went head to head and the rookie had his moments against one of the league’s biggest stars.

In the second quarter, Jalalon drained a jumper over Castro and in one defensive possession during the fourth period, the former Arellano University star held his own while being posted up.

“Nung nabantayan ko siya, binigay sa akin ni coach, sabi ko i-challenge ko sarili ko kasi idol ko siya (When I played defense on him, when coach asked me to match up against him, I told myself that this will be a challenge for me since he’s my idol).”