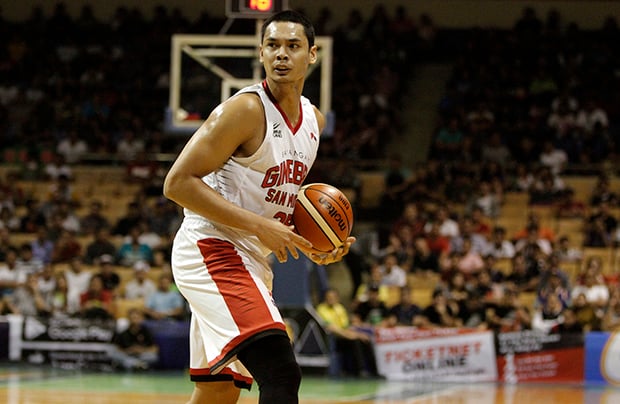 Tim Cone has always worried about seeing Japeth Aguilar get injured doing what he does best, and on Friday those fears were realized.

The lanky forward hyperextended his right elbow after a breakaway dunk at the 3:55 mark of the second quarter with Ginebra leading 44-35.

“I turned to (assistant coach) Richard (del Rosario) after it happened and said, ‘I’ve been fearing this for a long time.’ He’s doing it [dunking] at practice, he does it when he fools around. I always fear that he’s going to break a finger, sprain a wrist, or imagine hurting your elbow on the rim,” said the mentor.

Aguilar was subbed out and did not return in the second half as Ginebra hung on to a 99-90 win over Blackwater on Friday. He finished with 14 points and five rebounds in just 14 minutes on the floor.

But despite the risks that come along the stunning above-the-rim plays, Cone said that it’s hard to stop Aguilar from doing something that’s just part of basketball.

“…it’s just like running up and down the floor getting banged, getting up there on the rim. That’s just Japeth. That’s just his game and we won’t take it away from him. Everybody loves it, the crowd loves it, and our teammates love it so it’s more than just a shot. It’s an energizer for the team.”

But Cone is worried about Aguilar’s status for Sunday’s game against Phoenix, with his possible absence sure to compound the Gin Kings’ frontcourt woes. Aguilar is averaging 18.7 points, 8.8 rebounds, 1.4 assists, and 1.4 block so far.

“We’ve done a great job withstanding Greg (Slaughter)’s injury and having to turn around and do it with Japeth, it would be very, very difficult to have those guys out,” he said.

But if Aguilar’s status takes a turn for the worse, Cone has more than enough hardworkers to fill the void, with guys Jervy Cruz, Dave Marcelo, and possibly rookies Jammer Jamito and Jericho de Guzman to man the paint.

“We’ll just have to find the next man up. That’s what we’ve done with Greg and we have to do it with Japeth so be it,” he said.