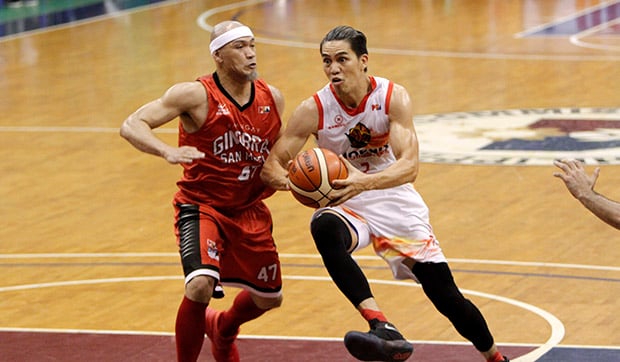 Phoenix Petroleum has flanked two cracks at seizing solo second place. The Fuel Masters succeeded in their third try versus a Japeth Aguilar-less Barangay Ginebra side.

With a methodical defense and a steady offense, the Fuel Masters rolled past the Gin Kings, 79-73, to virtually clinch a quarterfinals spot in the PBA Philippine Cup at the Cuneta Astrodome in Pasig Sunday.

“Twice we dropped shots at second. I didn’t want to pressure the guys so I just told them let’s just try to win,” said Phoenix coach Ariel Vanguardia.

“Them without Japeth helped us a lot. I wish him well, but it’s really a big help for us that we’re healthier,” Vanguardia also said.

With Ginebra without its athletic 6-foot-9 center, the Fuel Masters packed the paint in a ploy that worked as they held the Gin Kings to their second lowest output in the tourney.

Offensively, Matthew Wright, JC Intal, Willy Wilson and Simon Enciso stood out as Phoenix broke off the pack to grab solo second behind San Miguel Beer (9-1) with a 6-4 win-loss card.

Wright top scored with 18 points while Intal, Enciso and Wilson added 16, 11 and 10, respectively, for the Fuel Masters who relegated the Gin Kings to joint seventh place with the Blackwater Elite at 5-5.

The Gin Kings struggled badly without Aguilar and Aljon Mariano, trailing from start to finish. Aguilar showed up in uniform but Ginebra coach Tim Cone opted to rest him with the strained muscle in his right hand.

The Fuel Masters jumped the gun on the Kings, leading by 12, 38-26, at the half, and held sway all the way to the finish.