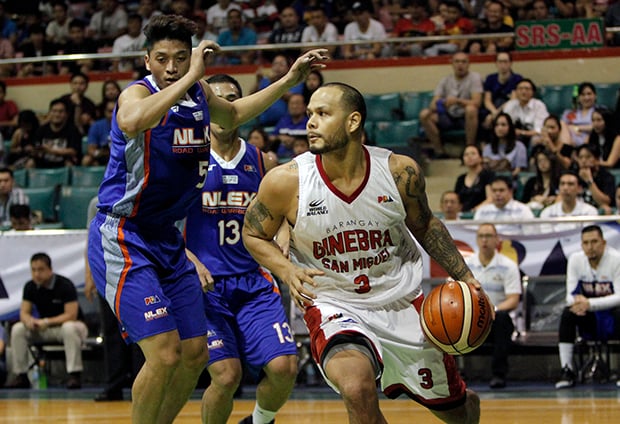 Barangay Ginebra shook off a sluggish start and overcame an early 17-point second-quarter deficit in trumping NLEX, 90-80, to claim the seventh quarterfinals slot in the 2017 PBA Philippine Cup at Cuneta Astrodome Sunday night.

A few hours after Terrence Romeo and Stanley Pringle formed a devastating two-man wrecking crew for GlobalPort, LA Tenorio and Joe Devance also formed a deadly duo for Ginebra, combining for 49 points to lead the team in nailing a 29th straight playoff appearance – a league record.

Tenorio and Devance spearheaded a 32-point turnaround for Ginebra from 20-37 down en route to the victory leaving Rain or Shine (5-5) and Blackwater (5-6) to dispute the last slot in the Last Eight.

With a poor quotient, Ginebra may end up as the seventh seed though, playing the No. 2 team that carries a twice-to-beat advantage in the quarters.

“It’s been a tough conference for us. But at least we’ve avoided playing (top seed) San Miguel Beer, and that’s good news for us,” said Ginebra coach Tim Cone.

“We’ve taken a lot of big punches, and we’re still standings and we still have a chance.”

The Ginebra struggle continued up to the first half of their game against NLEX.

But thanks to the spark provided by Tenorio, Devance, Scottie Thompson and Sol Mercado, the Kings turned the game around in the second and third quarters and they roared on to notch the key win.

From 17 points down, the Gin Kings came to within four, 42-46, at the half on a decisive charge towards the end of the second quarter.

They surged ahead 72-64 at the end of the third then led by as many as 15 before capping their 10-point conquest of the Road Warriors.

NLEX ended up with a poor 2-9 record.

Tenorio finished with a personal season-best of 30 points that went with nine rebounds, four assists and three steals against one error in 38 minutesof action.

Japeth Aguilar had significant contribution although practically playing with one hand while still healing a strained muscle on his right arm.

“Hopefully, in three to five days, he improves and regains his post strength,” said Cone.