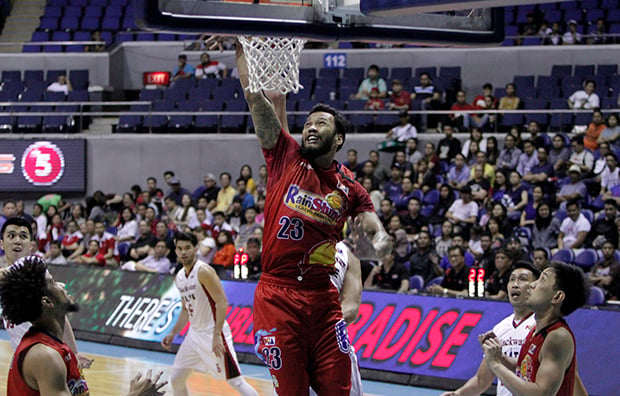 Rain or Shine just refused to be eliminated as it scored a 103-80 shellacking of Blackwater in a do-or-die duel for the last quarterfinals slot in the 2017 PBA Philippine Cup at Smart Araneta Coliseum Friday night.

The Elasto Painters snapped out of a rut and duplicated their 107-93 drubbing of the Elite last Dec. 9 to gain the right to play top seed San Miguel Beer in the quarters.

“We wanted it more. Before this game, we’re not playing well and we’re losing. In our last game against Alaska, we had no energy. But the guys stepped up tonight,” said Rain or Shine coach Caloy Garcia.

The E-Painters, however, face the tough task of beating the Beermen two in a row to make the Final Four.

They took the half at 45-36 and roared on in the second half to seal the win and book a berth in the quarters with early qualifiers San Miguel, Alaska Milk, Star, TNT KaTropa, GlobalPort, Phoenix Petroleum and Barangay Ginebra.

Playoff play begins Saturday at the MOA Arena with Star taking on Phoenix and TNT tackling GlobalPort in the opener of their best-of-three quarters showdowns.

On Sunday, San Miguel and Alaska take their first of two cracks at the semis versus Rain or Shine and Ginebra, respectively.

Cruz came through with a rare double-double game with 12 points and 12 rebounds, Washington top scored with 15 markers and added eight rebounds, Tolomia contributed 14, Belga and Chan chipped in 12 apiece while Ahanmisi put in 11.