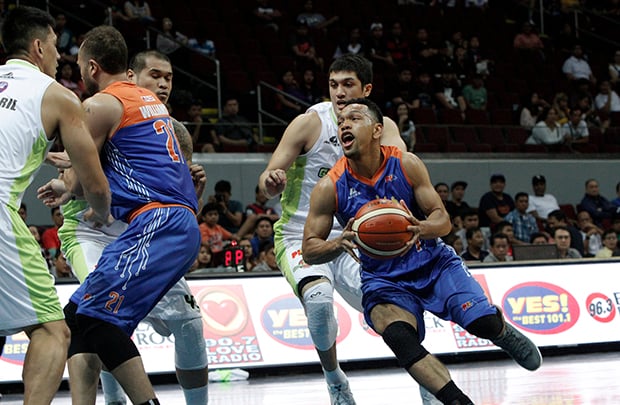 TNT surged ahead in the second half to beat GlobalPort, 109-101, to gain headway in Game 1 of their 2017 PBA Philippine Cup quarterfinals Saturday at Mall of Asia Arena.

Jayson Castro paced the KaTropa with 20 on an efficient 7-of-11 shooting from the field, that went with four rebounds, while Larry Fonacier went 5-of-9 from long range to wind up with 17 markers.

Mo Tautuaa had a near double-double with 17 points and nine boards, while Troy got 11 markers, eight rebounds, and two dimes.

“The objective tonight was to limit the production of Terrence Romeo and Stanley Pringle,” said TNT coach Nash Racela. “I think the players did their best in containing them.”

But Romeo still fired 15 of his 28 points in the fourth quarter and collected five rebounds and eight assists while Pringle had 19 points and five rebounds.

Unfortunately for the Batang Pier, they did get enough contributions from their other players.

Castro and Fonacier, then, went to work in the third frame as TNT broke away and grabbed an 18-point advantage, 86-68.

Romeo kept the Batang Pier in the game, cutting the deficit to just nine, 96-87 with 5:56 remaining, before Castro took matters into his own hands.

TNT shoots for a sweep in Game 2 on Monday at Smart Araneta Coliseum.