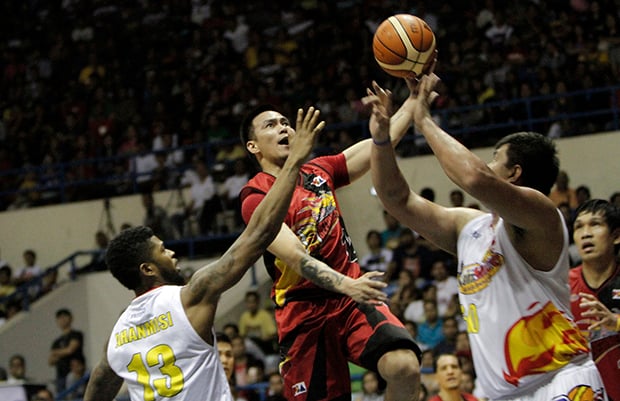 The 5-foot-11 guard came off the bench and fired 25 points on  5-of-7 shooting from threes, to go along with four rebounds and three assists as the Beermen stretched their winning streak to 10 games.

“I have to commend RR because he stepped up. If not for his outside shooting, we would have been in trouble,” SMB coach Leo Austria said of Garcia, who fired 12 markers in the fourth quarter.

June Mar Fajardo had a double-double with 14 markers and 14 boards, while Chris Ross got 13 points, four rebounds, and four assists.

Arwind Santos tallied 13 markers and 12 boards, and Marcio Lassiter fired 11 points and five rebounds as the Beermen flaunted their depth.

Garcia led the San Miguel breakaway in the third quarter where they led by as much as 16, 54-38, before Rain or Shine chopped down the deficit to six, 61-55 midway through the period.

Gabby Espinas made a big difference on defense as he held the fort on one end to allow the Beermen to bring the lead back to 13, 68-55.

The E-Painters refused to go away with Beau Belga cutting the deficit to five, 91-86 with 1:10 remaining before Santos scored four points in the clutch to put the game away.

San Miguel faces the winner of the TNT-GlobalPort matchup in a best-of-seven semifinals series.

Read Next
PhilCup17QF – San Miguel Beermen vs Rain or Shine Elasto Painters
EDITORS' PICK
Sex on the menu for Pogo workers
First female commodore named
Foreigners prepare to flee as China virus toll tops 100
We Can’t Guarantee You’ll Win a P20 Billion Jackpot, But We Can Help You Try
SM continues to send relief assistance to remote towns in Batangas
Best Gift Ideas in the Philippines
MOST READ
Sex on the menu for Pogo workers
‘Normal people doing normal work’ need not wear mask – WHO official
Kobe Bryant gear pulled out of Nike online store in wake of his death
Lacson on VFA impact study: ‘Better late than never’
Don't miss out on the latest news and information.