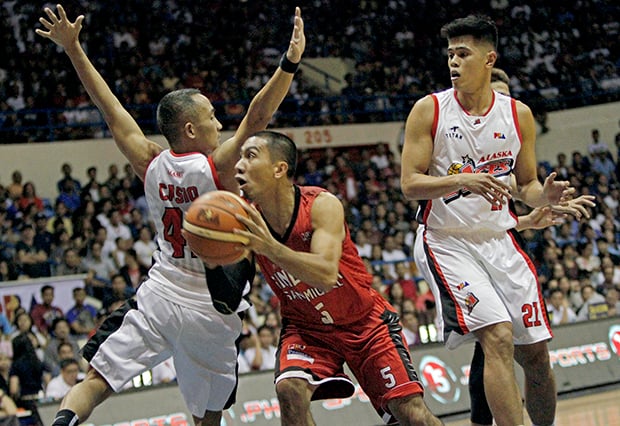 ANTIPOLO — Ginebra battled back from 17 points down and pulled off an 85-81 victory over Alaska on Sunday to force a do-or-die for a semifinals in the 2017 PBA Philippine Cup at Ynares Center here.

Alaska did creep up late, trimming the deficit to as low as three, 84-81, but could not secure the rebounds after Sol Mercado muffed his freebies in the final 13.2 seconds. Japeth Aguilar hauled down the offensive board and paved the way for LA Tenorio to seal the win with a split.

Tenorio unleashed 15 of his 16 points in the second half to go with six assists and two rebounds, while Scottie Thompson got a double-double of 15 markers and 10 boards.

Aguilar also had 15 points and 14 rebounds, while Mercado fired 12 in the win.

“It was a tough out there. But basically, all we’ve done is tie the series. We had to do that and we have another game,” said coach Tim Cone.

Game 2 is on Tuesday at Smart Araneta Coliseum, with the winner facing the victor of the Star-Phoenix series.

As focused as Cone is for the all-important tiff, he acknowledged the efforts his players did after going down by as much as 17.

“Our guys battled. We did what we had to do to stay alive and keep picking. It was an intense game for everybody,” he said.

Calvin Abueva paced Alaska with 20 points and 10 rebounds, while JVee Casio got 16 markers on 4-of-8 shooting from threes.