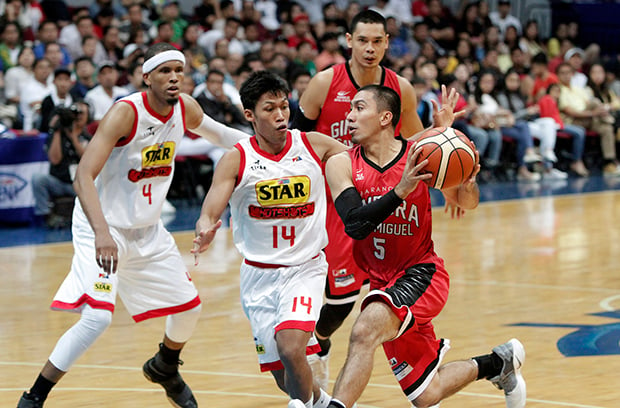 After barely squeezing through in Games 1 and 2, the Star Hotshots hardly take comfort in their 2-0 lead versus the ever-dangerous Barangay Ginebra Kings in their side of the 2017 PBA Philippine Cup semifinals.

Star coach Cito Victolero said they would keep their cautious stand as they take on the Gin Kings in Game 3 of their best-of-seven semis showdown at Mall of Asia Arena in Pasay City Monday night.

The Hotshots beat the Gin Kings just by a combined margin of six points in the first two games, scraping through, 78-74, in Game 1 then eking out a tighter 91-89 win in Game 2.

And Ginebra coach Tim Cone is hoping Joe Devance can be a game-changer on his possible return in Game 3 set at 7 p.m.

“There’s a chance that Joe may finally play. His presence should help us,” said Cone, hinting at the return of their ace forward who suffered a foot injury during their quarterfinals showdown with the Alaska Milk Aces.

For Star chief backcourt player Paul Lee, their biggest problem is the coaching brilliance of the Ginebra bench chieftain.

Lee believes they have a far deeper bench than Ginebra but the Gin Kings are competing well with Cone’s coaching.

“Kung iba yan, tambak na sa amin yan. But because of coach Tim, you can never tell what will happen even we’re ahead in the series,” said Lee. “So we’ll continue to prepare and do what we need to do to beat this team.

With San Miguel Beer’s loss to TNT KaTropa Friday, Star is now the hottest team in the tourney, riding the momentum of an eight-game romp going into tonight’s game.

The Hotshots walloped the Phoenix Fuel Masters by a whopping average margin of 25.5 points in their two-game sweep of their best-of-three quarters showdown.

Earlier in the tourney, Star crushed Meralco by 47 points and Mahindra by 37. In their murderous run, the Hotshots posted double-digit margins in all but one of their nine wins from the elims to the quarters.

But then they went through a wringer in Games 1 and 2 of their semis series versus Ginebra.

Cone, however, said the bottom line is they lost both matches.

“They beat us down the stretch. In both games, they executed and got rebounds. We didn’t,” said Cone.

But Devance could really change the complexion of the game if he’s finally able to return.