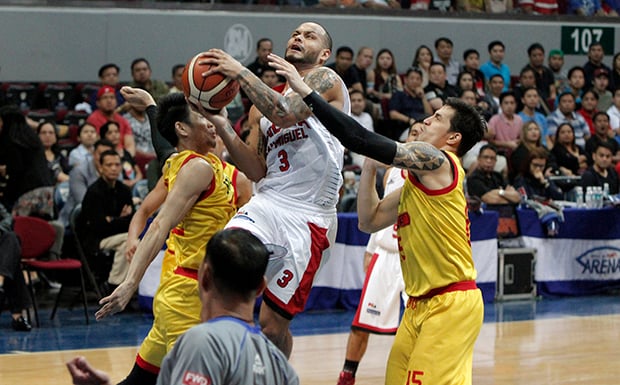 Barangay Ginebra beat out Star in a tough defensive battle, holding the Hotshots down to two points in the last 5:51 of play to pull off a 73-62 win in Game 3 of their PBA Philippine Cup best-of-seven semifinal showdown at Mall of Asia Arena in Pasay City Monday night.

Offensively, Sol Mercado, Japeth Aguilar and Mark Caguioa delivered the baskets they needed at endgame as the Kings applied the brakes on the Hotshots’ eight-game winning streak and thus prevented Star from getting a huge 3-0 lead in the race-to-four-games series.

“We hit some shots and I think that’s the game changer. It’s something that we’re not able to do in the first two games,” Cone also said.

Both really bled for their points, and the game went down as the lowest scoring match this conference and in the playoffs over the last eight conferences.

But Ginebra found some opening and hit the mark at endgame, and the Kings went on to finally pull one over the Hotshots.

Caguioa, Mercado and Aguilar combined for a lethal 14-0 nothing run in a late breakaway by the Kings.

“We made some shots and that’s really the key,” said Cone.

Mercado top scored with 16 points, Aguilar came through with a double-double game with 15 markers and 13 rebounds while Caguioa played quality minutes in the second half, rattling in eight markers.

After going 0-of-10 from beyond the arc in the first three quarters, the Kings nailed four in the payoff period, including back-to-back conversions by Mercado and Aguilar in a 14-0 roll from 59-60 count.

The Gin Kings took the upper hand at the turn at 33-29, gaining the four-point lead on 5-of-9 free throws as against the Hotshots’ 1-of-2 in the first 24 minutes of play.

Jio Jalalon went through heavy traffic and beat the buzzer with a twisting layup to cut their deficit to four at the half.

Ginebra actually seized an early double-digit spread at 17-4 before Star slowly got into the game and enjoyed its first lead at 43-42 on a running jumper by Mark Barroca halfway through the third period.