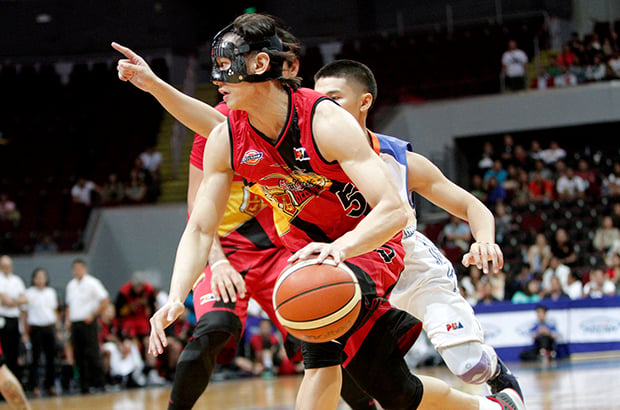 Playing with a sense of urgency, San Miguel Beer bounced back from back-to-back losses after hammering out a 97-86 drubbing of TNT to even their 2017 PBA Philippine Cup semifinals at 2-2 Tuesday night at Mall of Asia Arena.

Chris Ross exploded for a career-high 31 points built on five 3-pointers on top of five rebounds and five assists for the Beermen, who will aim for a 3-2 lead on Thursday at Smart Araneta Coliseum.

“I’m so happy that we’re able to tie the series or else we’re in deep trouble,” SMB head coach Leo Austria told reporters.

“I have to commend my players. They know the situation and they played with a sense of urgency especially Chris Ross. He was really focused on this game,” Austria said.

Known for his defense, Ross put on a shooting clinic in the third quarter where he scored 18 points alone, 12 of which coming from downtown, to keep TNT at bay.

The KaTropa had one last fight in them in the fourth quarter as they trimmed a 22-point deficit down to nine, 83-74, after a triple by Larry Fonacier with 7:01 remaining.

But the Beermen regrouped and June Mar Fajardo’s three-point play stretched their lead back to 14, 91-77, with 4:47 left.

Fajardo notched a double-double with 15 points and 15 rebounds while Alex Cabagnot added 12 points and Gabby Espinas chipped in 10 off the bench.

Fonacier paced TNT with 15 points as Jayson Castro struggled offensively finishing with 13 points on 5-of-17 shooting from the field.