Ginebra has advantage in Game 7 because of Cone, says Pingris
Close
menu
search

Ginebra has advantage in Game 7 because of Cone, says Pingris 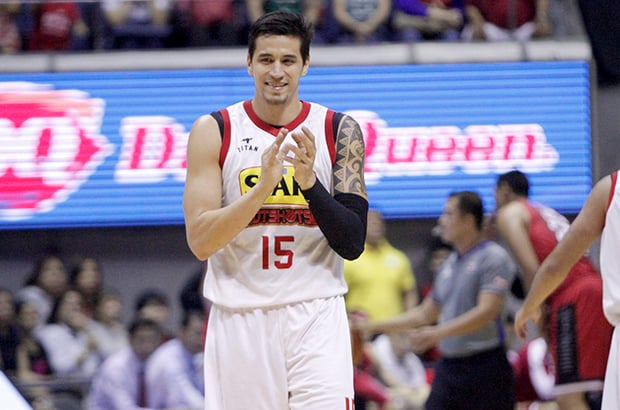 With the Star-Ginebra semifinals series going the distance, Marc Pingris admits the Hotshots will be the underdogs in their do-or-die.

“They have the advantage because they have coach Tim (Cone),” Pingris said in Filipino. “He has a lot of experience in these situations compared to coach Chito (Victolero).”

Pingris should know, given that Cone previously called the shots for the Purefoods franchise and even carried the squad to a Grand Slam back in 2014.

Pingris also kidded that for the Hotshots to gain the slightest edge, he may have to hold his former teammate and Game 6 hero Joe Devance hostage.

“I’m going to give you a Black Label,” Pingris shouted to Devance in a post-game banter.

On a serious note, the energetic forward said that though odds are against Star, that doesn’t mean that it will just roll over and die come Tuesday at Mall of Asia Arena.

“For us, we have to defend. We have to look at our mistakes today,” said Pingris, as the Hotshots hope to bounce back from this 91-67 Game 6 defeat to Ginebra on Sunday.

“It was their night. We did all we can but the game was really for them. So on Game 7, we have to give it our all and leave nothing behind. Whatever we have left, we have to put it out there.”

Pingris finished with 14 points, 10 rebounds and three assists in Game 6, but there’s no doubt that his team needs more from him and everyone else if they want to advance to the 2017 PBA Philippine Cup Finals.

“The game here is on our adjustments. Whoever adjusts better for Game 7 will get the edge,” he said. “We know every one will give their 100-percent, so let’s see what happens on Game 7.”

Read Next
Hurting Devance plays key role for Ginebra in Game 6
EDITORS' PICK
‘NCR Plus’ to be under MECQ starting April 12 until April 30 — Palace
Speed up your game with the new vivo Y20s [G]
Pre-order the new vivo Y20s [G] to get a free TWS earphone
Metro Manila to have shortened curfew hours from 8 p.m. to 5 a.m. under MECQ
Malls adjust ‘NCR Plus’ operating hours for April 12-30 MECQ
Pru Life UK receives four golden arrows for solid corporate governance
MOST READ
Stop ‘creeping occupation’ of ‘militia’ boats in WPS, Pacquiao asks China
Bea Alonzo clarifies status of her relationship with Dominic Roque
Convicted former aide of Sen. Bong Revilla dies — BuCor
Locsin to China: ‘Then move out’
Don't miss out on the latest news and information.