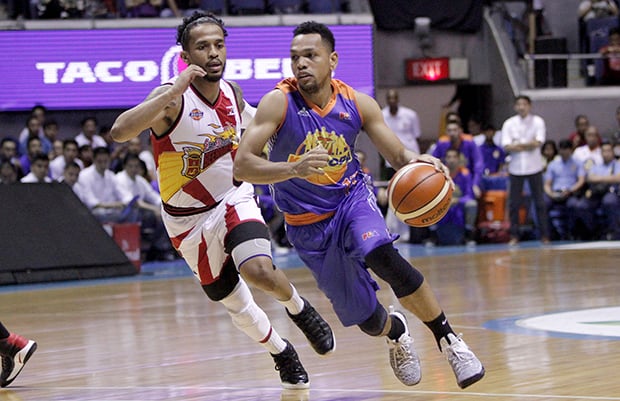 Jayson Castro led TNT to within a win away from the PBA Philippine Cup Finals but in the KaTropa’s biggest game of the conference, the superstar point guard could only watch helplessly behind his team’s bench as it yielded Game 7 of the semifinals to the San Miguel Beermen on Monday.

Castro was forced to sit out TNT’s all-important game due to a hamstring injury he sustained in the fourth quarter of Game 6 on Saturday.

The 30-year-old Castro said he regrets missing such a crucial game but knows injuries are part of the game.

“I regret it because we had a big chance [to make the finals],” he said in Filipino. “But again, the things we’re not expecting to happen, happened and we can’t blame anyone for it. We’re just athletes, we’re not superhuman and we can’t really avoid instances like this.”

Following a 101-94 victory in Game 5 last Thursday, TNT all had to do was to win one more to make the finals.

But the KaTropa just couldn’t close it out as the Beermen, led by June Mar Fajardo, won the last two games of the series and returned to the championship round for the fourth time in the last seven conferences.

Castro said TNT should learn how to finish games better.

“The most important thing is for us to learn how to close out a series,” he said. “That’s the biggest lesson so that we’ll be more prepared the next time we’re in the playoffs.”

Castro is certain he’ll be ready come the Commissioner’s Cup.

Read Next
Beermen return to finals, overcome KaTropa in Game 7
EDITORS' PICK
Speed up your game with the new vivo Y20s [G]
Metro Manila to have shortened curfew hours from 8 p.m. to 5 a.m. under MECQ
Philippines, US to begin 2-week joint ‘Balikatan’ exercises on Monday
‘NCR Plus’ to be under MECQ starting April 12 until April 30 — Palace
Pre-order the new vivo Y20s [G] to get a free TWS earphone
Pru Life UK receives four golden arrows for solid corporate governance
MOST READ
Stop ‘creeping occupation’ of ‘militia’ boats in WPS, Pacquiao asks China
Bea Alonzo clarifies status of her relationship with Dominic Roque
Convicted former aide of Sen. Bong Revilla dies — BuCor
Locsin to China: ‘Then move out’
Don't miss out on the latest news and information.