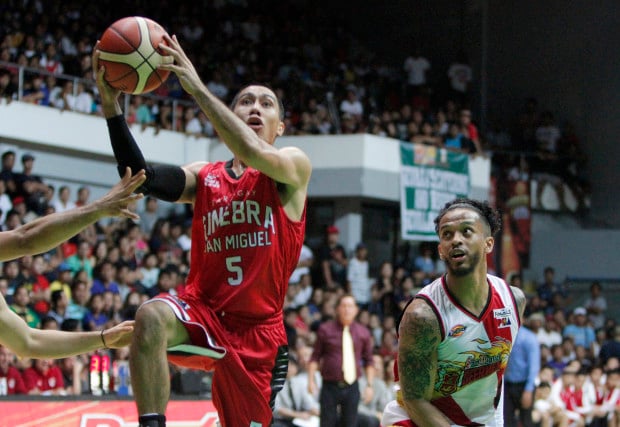 Ginebra forward Joe Devance sent the game into overtime, 110-all, after following up his own miss at the end of regulation.

“What a game, huh?” Ginebra head coach Tim Cone asked. “Just goes to show how good San Miguel is, in terms of their ability to come back from a 24-point halftime deficit. They just dominated us in that third quarter and most of the fourth. The only thing we did good is we were resilient. We fought with the ups and downs, and we continued to battle, we found a way to put it into overtime.”

But San Miguel didn’t go down that easily, with Marcio Lassiter unloading 16 of his 21 points in the Beermen’s blazing 39-point third frame.

Unfortunately for SMB, Lassiter got ejected with still 1:00 left in the period after incurring a technical foul for taunting. He was earlier whistled for a flagrant one in the second quarter.

The Beermen’s woes were further compounded with June Mar Fajardo fouling out with 2:33 remaining in regulation, but got a lift from Chris Ross and reserves Ronald Tubid and Gabby Espinas late.

Tubid, though, split his freebies with 3.2 seconds remaining and left the door open for Ginebra, as Devance scored the game-tying putback at the buzzer to send the raucous crowd on its feet.

San Miguel’s comeback bid fell short with Ross fouling out early in overtime as Thompson and Sol Mercado put the Beermen away.

Arwind Santos topped San Miguel with 23 points and 15 rebounds, but shot 5-of-18 from threes.

Ross finished with 16 markers, 11 assists, and five rebounds, while Tubid had 16 points and seven boards.

Fajardo was limited to just 10 points, seven rebounds, and four blocks in a foul-plagued outing.

Game 3 is on Wednesday night at Smart Araneta Coliseum.

PAL wants deal with creditors before filing for bankruptcy

Duterte on PH court win over China: ‘That’s just paper; I’ll throw that in the wastebasket’