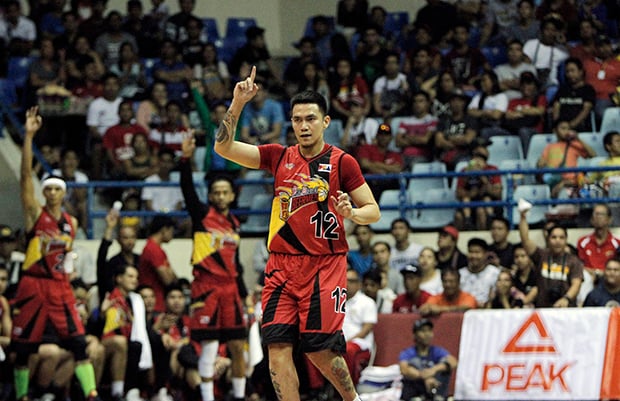 San Miguel is set to get a much-needed boost with guard RR Garcia already cleared to play for Game 3 of the 2017 PBA Philippine Cup Finals.

The fourth-year guard, who has been out since Game 6 of the Beermen’s semifinals conquest of TNT KaTropa due to an injured right shoulder, is looking forward to hit the court anew.

“I’m excited. That’s the best feeling, playing in the Finals,” he said in Filipino as the Beermen wrapped up their Tuesday morning practice at Acropolis Greens.

Averaging 7.4 points, 1.7 assists, 1.5 rebounds this conference, Garcia’s entry will surely be a plus for San Miguel as he is expected to boost his team’s bench mob which has been producing 33.5 points through two games in this championship series.

“It’s not just the first group which we will rely on. And it’s the lift given by the second and third group which will win us games. We must deliver in the limited minutes we get so our starters can also get their rest,” he said.

Beermen head coach Leo Austria, however, is taking a cautious approach as he eyes to insert Garcia back into rotation while also wary of the possibility that he could get re-injured.

“He’s on a day-to-day basis. Our PT said that the development of his injury has been good, and he was shooting earlier to see if there’s still some pain,” Austria said.

Austria aims to play Garcia either in Game 3 on Wednesday or Game 4 on Friday.

“Once he’s ready, we’ll put him in our usual rotation. Physically, he’s ready except for his shoulder, but he’s in shape. We’ll see tomorrow or on Friday,” he said.

“I hope I will be able to play tomorrow, but that depends on what coach’s decision will be,” Garcia said.