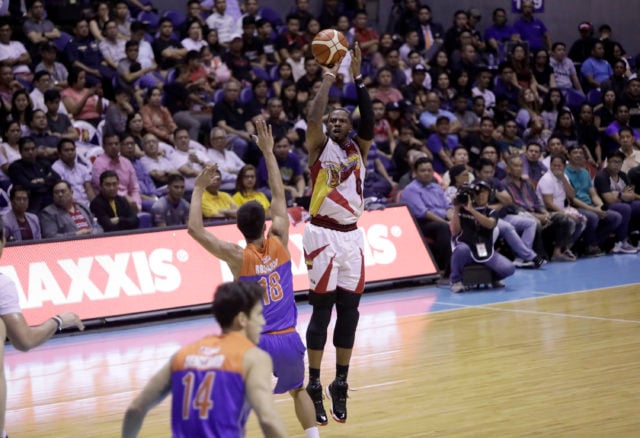 San Miguel did just enough to hold off TNT, 109-97, and gain a 2-1 edge in the 2017 PBA Commissioner’s Cup Finals Sunday at Smart Araneta Coliseum.

San Miguel shoots for a 3-1 lead on Wednesday still at Araneta Coliseum.

“This is a hard fought game. I think what happened to the game is we did not have any major adjustment and we just kept our intensity high,” said SMB head coach Leo Austria.

Things got heated near the end of the first half when Ross engaged in a verbal duel with TNT’s stand-in import Mike Myers and Governors’ Cup reinforcement Michael Craig. It escalated during the halftime break when Craig allegedly pushed off a metal gate which hit San Miguel governor Robert Non and some of the Beermen staff.

With Ross kept on the bench after incurring a flagrant foul penalty one at the 2:49 mark of the second quarter, San Miguel got a huge shot in the arm thanks to the stupendous play of Brian Heruela as he sparked his squad to a 16-5 run and grab a 62-52 lead with seven minutes to play in the third quarter.

San Miguel also weathered Rhodes’ foul woes, as its all-Filipino crew kept the KaTropa at bay and preserved its 10-point cushion up until the fourth quarter.

Also aiding the Beermen were TNT’s 23 turnovers, which turned to 26 easy points for them.

Jayson Castro contributed 17 points, three boards, and three assists, but committed 10 turnovers while Roger Pogoy was held scoreless for the second straight game after delivering a career performance in the finals opener.