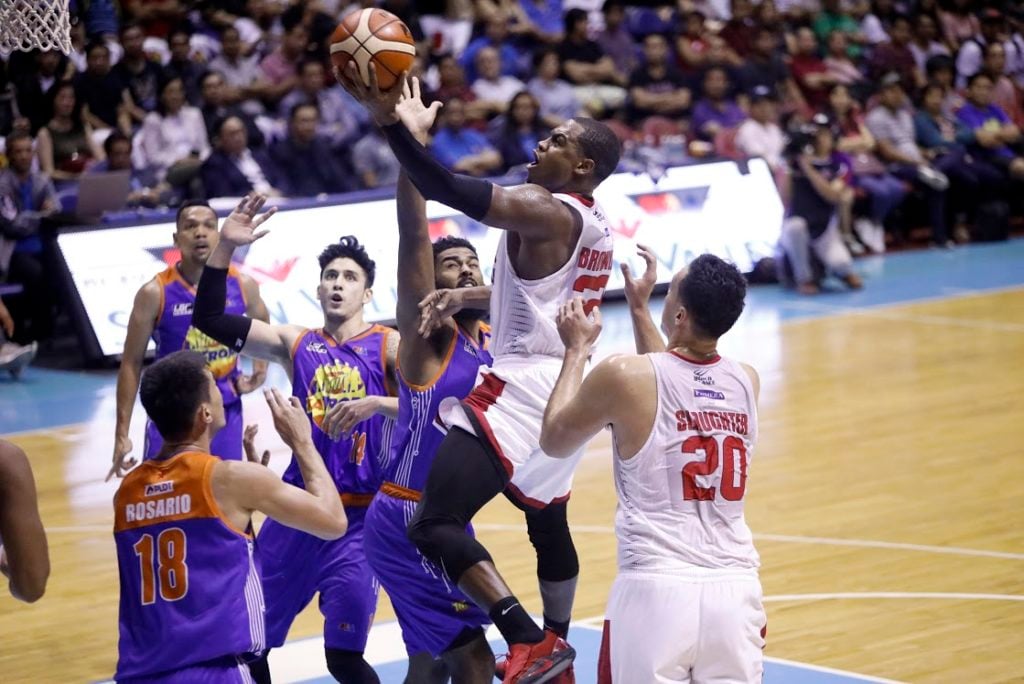 Defending champion Barangay Ginebra gets a shot to defend its crown after dispatching TNT, 115-105, in Game 4 of their best-of-5 semifinals series in the PBA Governors’ Cup Sunday at Smart Araneta Coliseum.

The Gin Kings arranged a finals rematch with Meralco starting on Friday at Quezon Convention Center in Lucena.

The Gin Kings’ relentless pursuit finally paid dividends in the fourth quarter as the Brownlee-led 24-8 charge coincided with the KaTropa’s shooting going ice cold, with TNT firing a paltry 2-of-20 clip in the first eight minutes of the period.

Ginebra, then, took a 104-94 lead with 4:07 left to play punctuated by a three from LA Tenorio before Greg Slaughter iced the game with a huge slam to give coach Tim Cone his 32nd finals appearance.

“We were just fortunate that Glen Rice went out. But it was still a great game; they were making shots. It was quite a frustrating first half,” said Cone.

“But our guys came collected in the second half and started playing like we do.”

With its back against the wall, TNT came out like a house on fire as it established an early 16-point advantage, 35-19, courtesy of a three from Anthony Semerad.

But that blaze was quickly doused after KaTropa reinforcement Glen Rice Jr. was ejected with 1:41 remaining in the opening frame after incurring a flagrant foul penalty one and a technical for throwing the ball to a fallen Kevin Ferrer.

Though Jayson Castro kept TNT in the driver’s seat and put his team up by 18, 72-54 in the third quarter, Brownlee had other plans as the import commandeered Ginebra’s 28-point third quarter outburst to cut the KaTropa lead down to six, 86-80, at the end of the third quarter and set up the close finish.

The Gin Kings’ 18-point comeback was the biggest comeback in the playoffs in seven years, or since the franchise crawled back from 20-points down to upend Alaska in 2010-11 Philippine Cup quarterfinals.

Troy Rosario topscored for TNT with 28 points and 10 rebounds, while Castro carried the mantle with a near triple-double performance of 26 markers, nine assists, and seven boards in the losing effort.