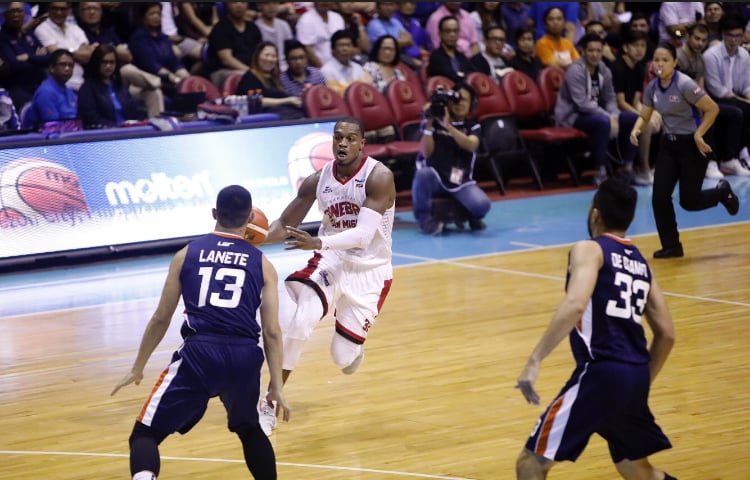 Barangay Ginebra leaned on the duo of Justin Brownlee and LA Tenorio to beat Meralco, 86-76, for a 2-0 lead in the 2017 PBA Governors’ Cup Finals Sunday at Smart Araneta Coliseum.

Once again, the runner-up in the Best Import race, Brownlee showed that no award snub can deter him from his quest of giving the Gin Kings back-to-back titles as he scattered 19 points, 13 rebounds, seven assists, and two steals.

Tenorio also unloaded 10 of his 14 markers in the payoff period, none bigger than his shot clock-beating trey with 1:07 to play to give his side an 82-76 lead that also took the air out of the Bolts.

“LA’s really been a big shot maker in the whole conference for us and his confidence was amazing. I think that was the biggest shot of the game and it really turned the tides for us,” said Ginebra head coach Tim Cone.

Ginebra got its act together in the final five minutes as they staged a killer 17-1 finishing blitz to take the win out of Meralco’s grip.

The Gin Kings’ defense was also impressive as they held the Bolts without a field goal in the last 5:56 and forced young guns Baser Amer and Chris Newsome to commit costly turnovers down the stretch.

Japeth Aguilar had 16 points and eight rebounds, while Joe Devance got 10 markers and six boards, as Ginebra survived Greg Slaughter’s off-shooting night, as the newly-minted Best Player of the Conference was limited to just three points and six rebounds.

Ginebra shoot for a 3-0 lead in the best-of-7 series on Wednesday, still at Smart Araneta Coliseum.

Unlike Game 1, the Bolts found their mark but only to misfire they needed them the most.

Amer and Ranidel de Ocampo both wound up with 10 markers in the losing effort.